The deathly silence is broken once again when the Watcher finally speaks. With a slight unrecognizable accent, he addresses his helpless prey.

“One of you will live tonight….the other will die.”

Quickly seizing the opportunity, Ish fights through the tears that try to choke his voice. Hysterically, he addresses the dark figure.

“TAKE HER……OH GOD….PLEASE TAKE HER!” spews from his mouth as he points a shaking finger at Claudia.

Turning towards Claudia, the Watcher slowly advances towards her. Snapped out of her paralyses from hearing her name as she is offered up as a sacrifice, Claudia’s survival instinct rapidly activates as she jumps up from the floor and grabs the largest butcher knife that is within reach. Slicing the night air with quick wild swings, she frantically tries to keep her adversary at bay. The Watcher, standing outside the arc of the blade, stares for a couple of seconds at his prey before swiping Claudia across the face with a quick backhand. Falling to the floor from the vicious strike, the knife flies out of Claudia’s hand and sticks into the wall next to the refrigerator. Thick blurry clouds obstruct Claudia’s sight as she shakes her head a couple of times trying to clear her vision. Upon opening her eyes, she is confronted by the demonically glowing red eyes that are only a couple of inches away from hers. A cold hard hand quickly grasps her neck. Defiantly, she stares back into his eyes, showing no fear. Sharp fangs quickly penetrate Claudia exposed neck, greedily consuming the blood within.

Cowering on the floor, Ish watches as the monster feeds on his battered girlfriend. Her body instantly starts to convulse, fighting against the monster that feeds on her before finally succumbing to the inevitable. Ceasing all movement, her body goes limp. The Watcher stands, calmly turns, and begins to advance on his next victim. Morbid fear once again starts to take control of Ish’s body. Through trembling limps, he tries to plead with the mysterious figure.

“Wwwait!….you said that one would live and the other would die……but….”

Before he could finish his sentence, Claudia’s limp body suddenly gained new life as it gradually rises from the floor from behind the looming mysterious figure. Calmly, the Watcher addressed his frightened victim.

Even today when I read that passage from my book, it still surprises me. Would I have ever thought that I would write a book? No way! Not me! That’s what I used to think until I found the darkness…or maybe it found me? I am not sure. Who am I? My name is Gabriel Adams and I write vampire stories. 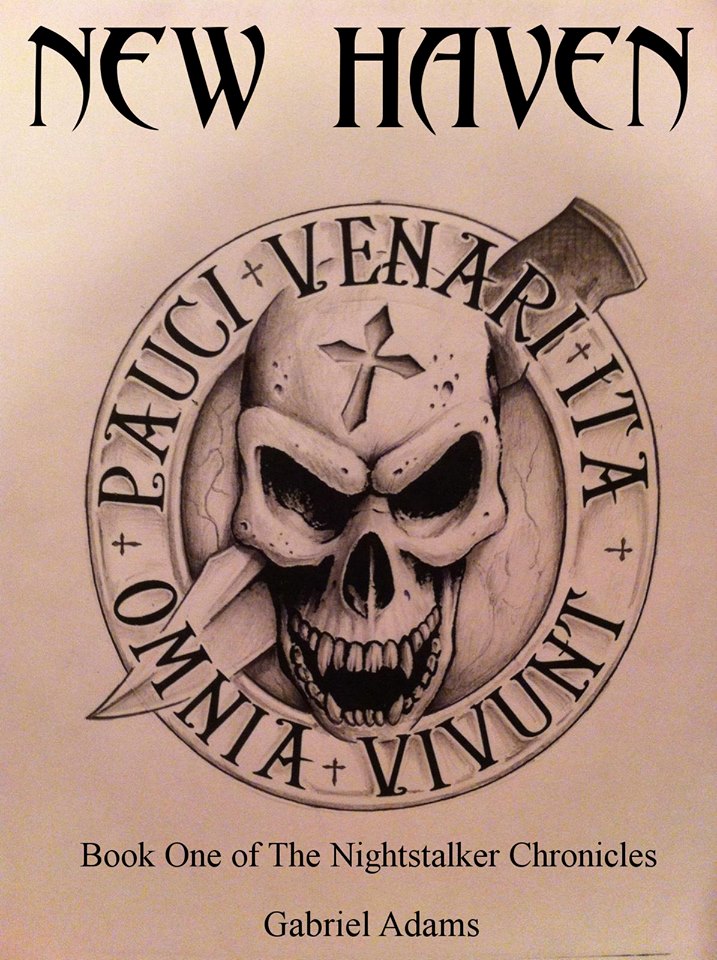 I never thought that I would write a book. Let alone a book about vampires or vampire hunters. I have always enjoyed a good vampire movie, but I never read any books based on vampires or sought out anything related to the vampire genre. In a way, I feel like the pop culture of today is partially responsible for influencing me. With the influx of romantic vampire movies and novels, how could anyone possibly escape the vampire rush? I didn’t.

I can’t lie. Movies and books like the Twilight series are interesting. I did enjoy reading them, but their portrayal of vampires don’t fit what I consider vampires to be like. How can a being that is the alpha predator on our planet with supernatural powers be considered romantic. Let alone how can they have compassion and feelings for the very things they hunt and feed on? It’s like a cow trying to tell other cows that they should feel sorry for people because people eat them. That’s asinine! Vampire feed off the blood of humans! That’s it. It doesn’t get any simpler than that.

The darkness found me about two years ago on a family outing to a local farmers market. To be honest, I had no desire to go. I had worked all week long at my job where I run a stamping press, and it was Sunday, which meant a lazy day for me that involved ordering pizza and sitting around in my p.j.s. I didn’t want to go anywhere. But, pulling myself off the couch that day was one of the best things I ever did!

After my family and I finished our hay ride, I decided to walk around the gift shop. When I walked through the doors, I was greeted by the darkly seductive music of Midnight Syndicate. Their haunting melodies caused a side of my imagination that I never knew existed to suddenly come alive! After that day, images and scenarios about vampire hunters and the lifestyles they live constantly played themselves out in my mind. I let the ideas run through my head for about a week before I started to write them down. One thing led to another and the next thing I knew, I was writing a book.

Now, at thirty seven years old, I feel that I accomplished something in my life that I have never would have dreamed possible before that day. So please, join me and adventure into the town of New Haven and discover the dark secret that this perfect place tries to keep hidden.