Tumblr is one of my favorite social media platforms because it combines the micro blogging essence of Twitter with the vivid filtered world of Instagram into one neat and tidy package.

I admit my Twitter addiction is what originally led me to Tumblr, but my love of all things related to vampires is what hooked me into this picturesque world of extraordinary “likes” and “reblogs.”

Tumblr basically enables anyone, no matter how tech savvy, to create their own mini website where they can flood the world with their interests.

So what are Vamped’s 10 most popular Tumblr posts? Before we continue, let’s establish what constitutes a popular post on Tumblr. Essentially it’s the same idea as Twitter, just dissimilar terminology. Each post displays how many “notes” it has. A “reblog” or “like” are classified as notes. The higher the notes, the more popular your post is, which of course also indicates how much it has been shared around the Tumblr world.

I sorted through every post for the most popular ones and was surprised at the pattern that was revealed. Before we delve into it, let’s check out Vamped’s top 10 Tumblr posts!

Not much of a back- story to this one, it was just something I found along the way while Googling vampire images. It basically appealed to my logolepsy tendencies and love of street signs, which you can read about on my website. 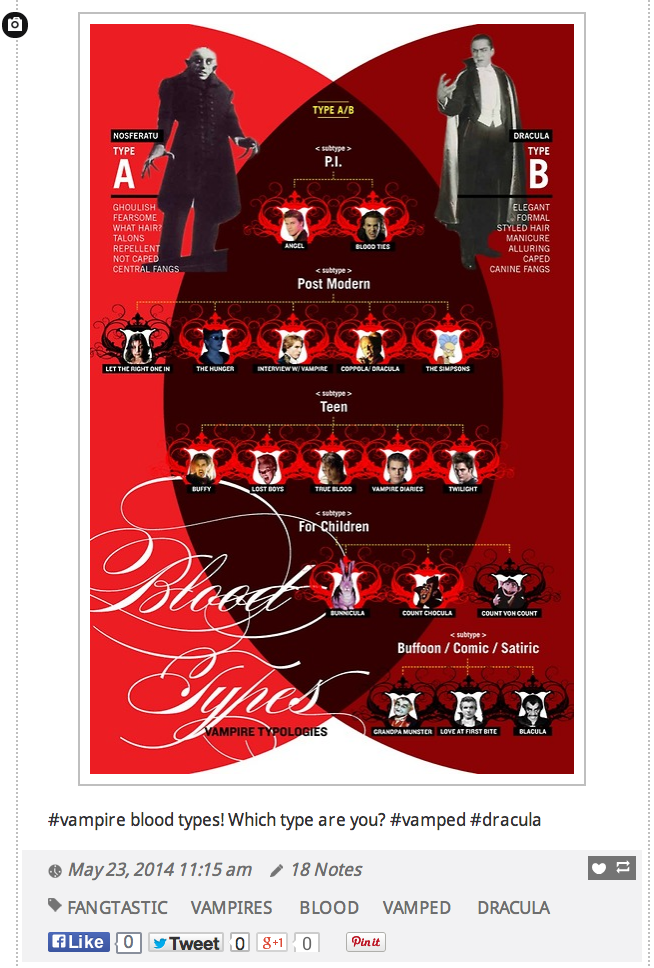 This little gem I found by actually searching for “vampire infographics.” What appealed to me about this was it seemed to offer something for everyone, no matter what your vampire preference is. Just so we are on the same page, an infographic is visual representation of information or data. 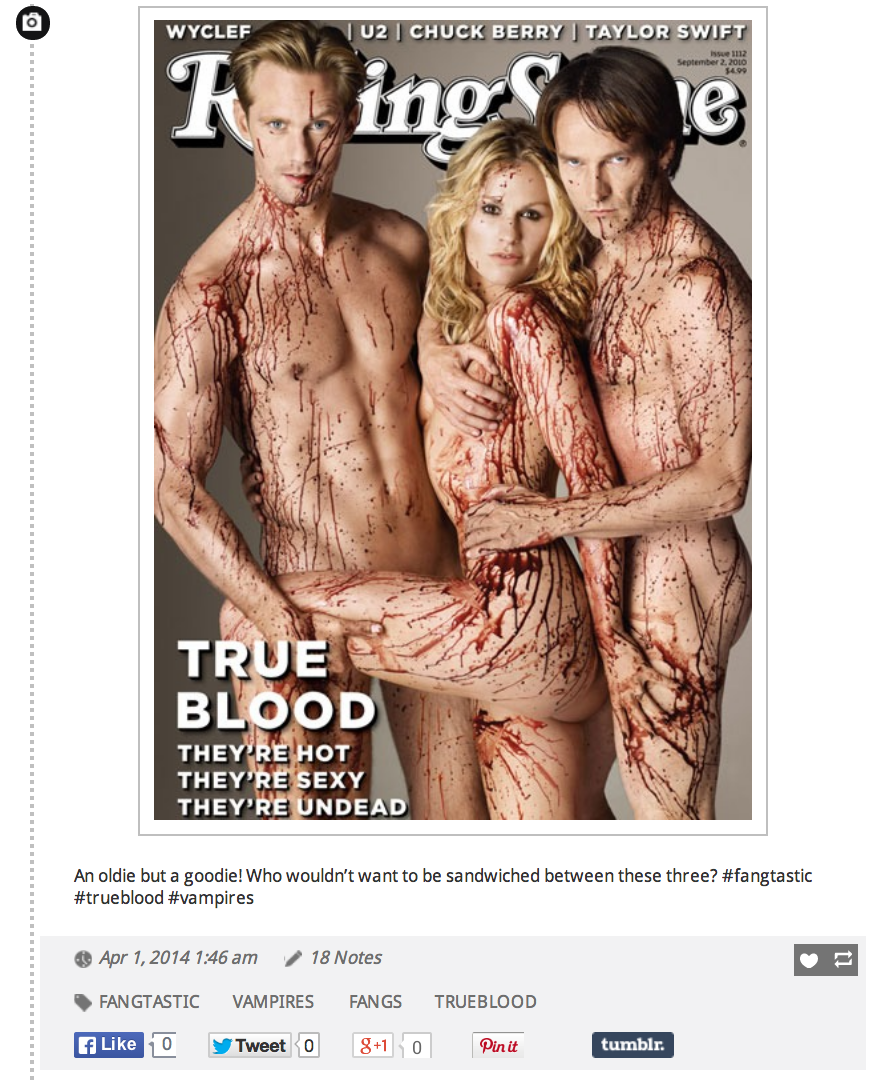 This epic cover was from the September 2, 2010 issue of Rolling Stone. It got mixed reviews at the time because some people felt it was too gory and revealing. True Blood was cool with the attention, though; after all any press is good press right? The sexy cover shoot also managed to score seventh place on Time Magazine‘s “Top 10 Nude Magazine Covers.” 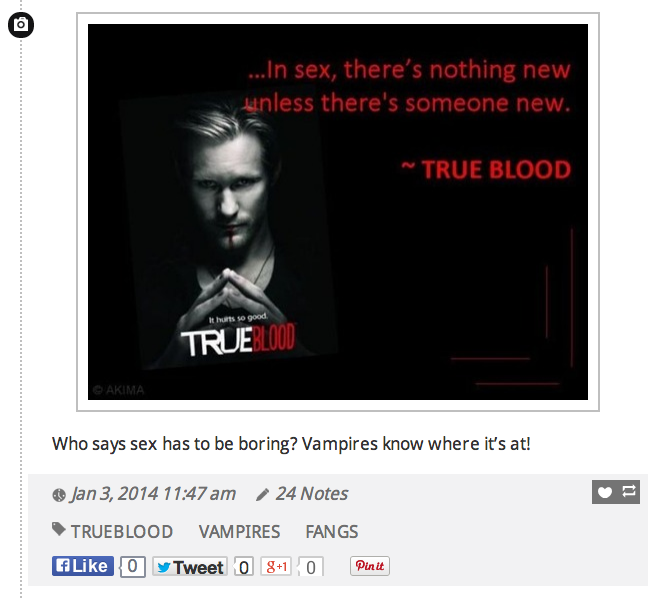 Anything on Tumblr that is True Blood-related is always a hit and easy to get reblogged or liked, especially when it includes a picture of Eric Northman (Alexander Skarsgård). Now that the season finale on June 22, 2014 is fast approaching, True Blood is more popular than ever!

A fun fact: Alexander Skarsgård got his first big break in the film Zoolander (2001) as one of the male model roomates that perished in the gasoline fight scene. 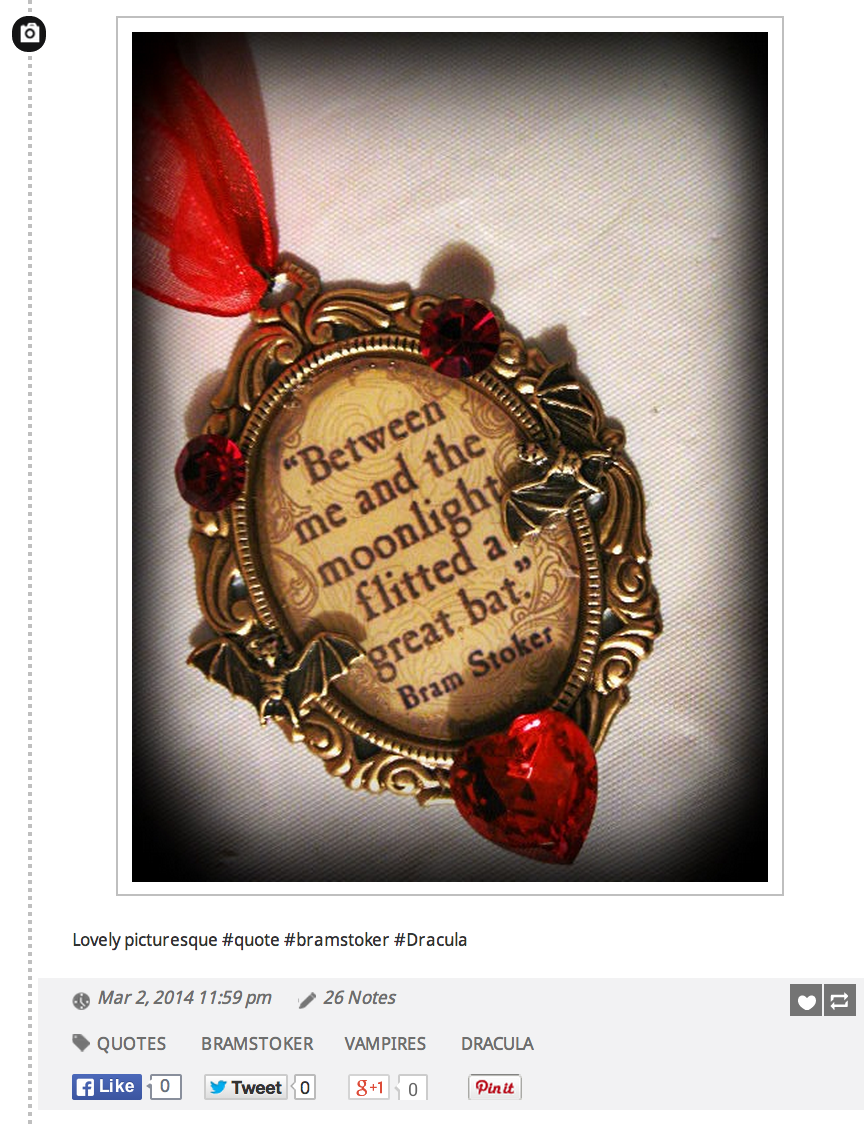 A quote from Bram Stoker’s Dracula elegantly displayed on this decorative necklace. Who wouldn’t want to add this gorgeous piece to their collection whether you’re a die hard goth or Dracula fan? The quote is from chapter 8:

13 August.–Another quiet day, and to bed with the key on my wrist as before. Again I awoke in the night, and found Lucy sitting up in bed, still asleep, pointing to the window. I got up quietly, and pulling aside the blind, looked out. It was brilliant moonlight, and the soft effect of the light over the sea and sky, merged together in one great silent mystery, was beautiful beyond words. Between me and the moonlight flitted a great bat, coming and going in great whirling circles. Once or twice it came quite close, but was, I suppose, frightened at seeing me, and flitted away across the harbour towards the abbey. When I came back from the window Lucy had lain down again, and was sleeping peacefully. She did not stir again all night. 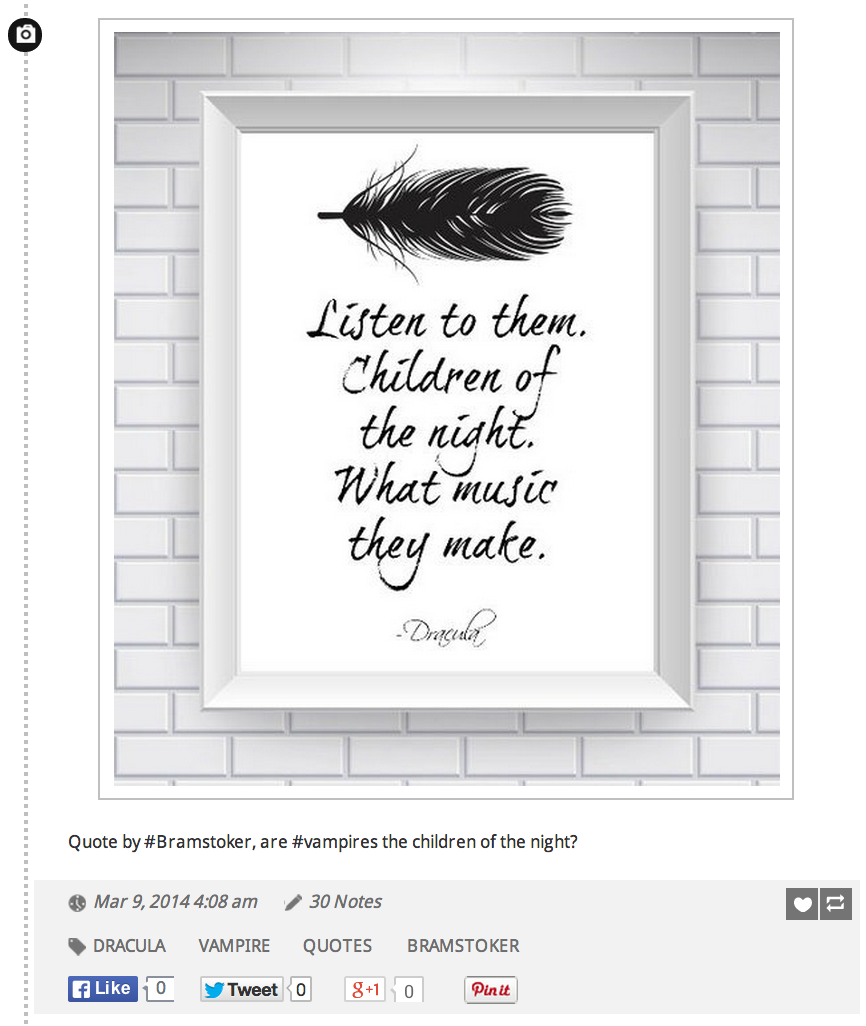 For any Dracula virgins out there, this is a famous quote from Bram Stoker’s Dracula. Until March, I was one of those people. Sure, I’ve seen a couple of the movies before, but never picked up the book. Why? Honestly, I just never got around to it.

Anthony and I had a discussion one night and he compared me to Mina in the novel. I didn’t know what he meant, which intrigued me enough to take the plunge and seek out the book. He encouraged me to pick up a copy, at which point I found out not any version would do.

He was kind enough to post an inquiry in the Facebook group he co-admins, The Lord Ruthven Assembly. Everyone’s feedback and recommendations were amazing and now I can say I am happily one third through my Broadview Edition.

The quote comes from chapter 2. The count says this to Jonathan Harker just after he arrives at the castle. The full quotation is:

“Listen to them, the children of the night. What music they make!” Seeing, I suppose, some expression in my face strange to him, he added, “Ah, sir, you dwellers in the city cannot enter into the feelings of the hunter.”

Wolves can be heard outside the castle walls, howling up a storm. There is an implied connection between the vampire and the wild animals outside, which is a common theme in vampire folklore; however, it should be noted that each culture is distinctive regarding their beliefs. 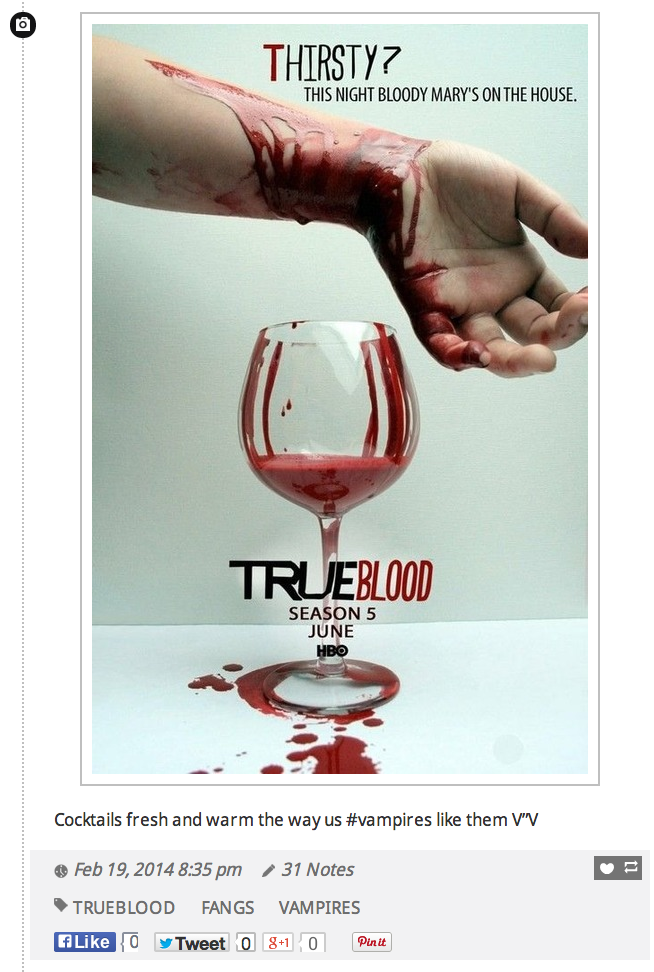 This is a print advertisement I found for True Blood, season 5. The hit HBO series is well-known for their edgy, in-your-face marketing campaigns, which I discussed in “Why Has True Blood Been So Successful?“ 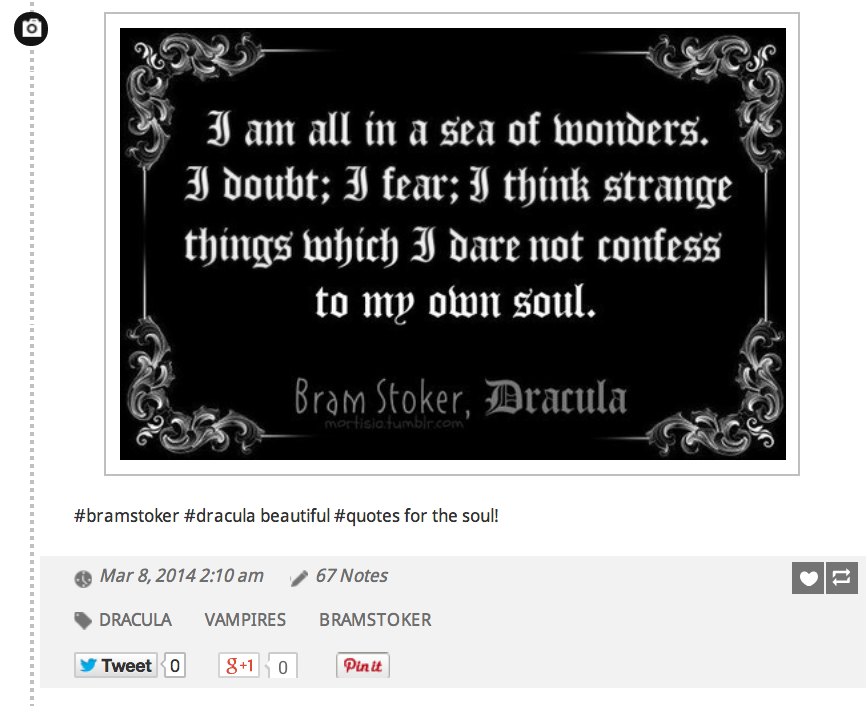 Okay, last Dracula quote, I promise! This one is also from chapter 2 and states,

I am all in a sea of wonders. I doubt. I fear. I think strange things, which I dare not confess to my own soul. God keep me, if only for the sake of those dear to me!

This was Jonathan Harker’s reaction after his first encounter with Dracula on the day he arrived at the castle. He didn’t realize how creepy the Count was until he observed his appearance in great detail, while they dined and socialized. 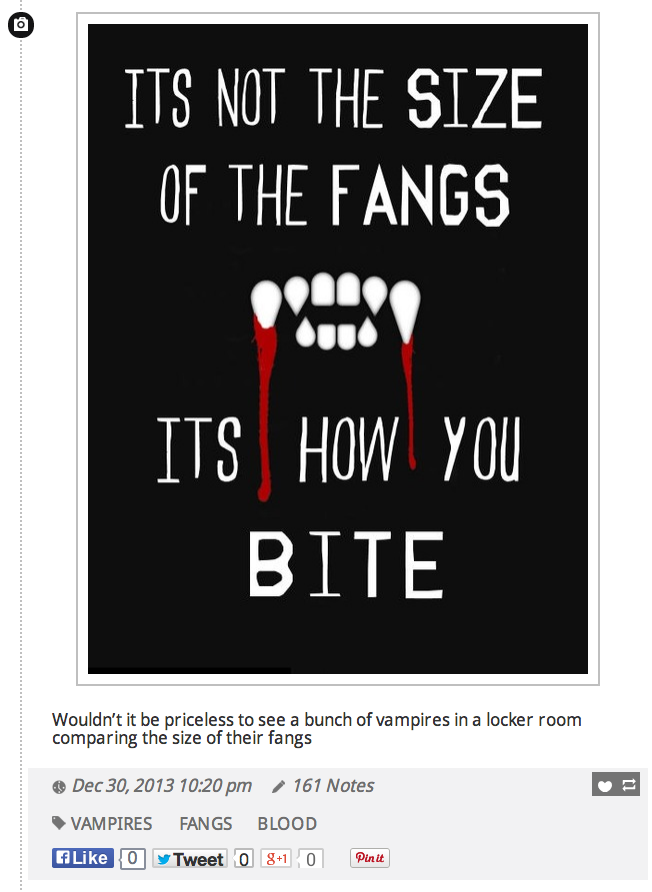 This was another random find as a result of my Googling “vampire signs.” Not to be vulgar, but it immediately made me think of a team of guys in a locker room, comparing themselves and the common quotation you hear some women reference “it is not the size that counts, but how you use it.”

I know my mind can be in the gutter some days, but by the number of notes on this post everyone else’s is there with me. 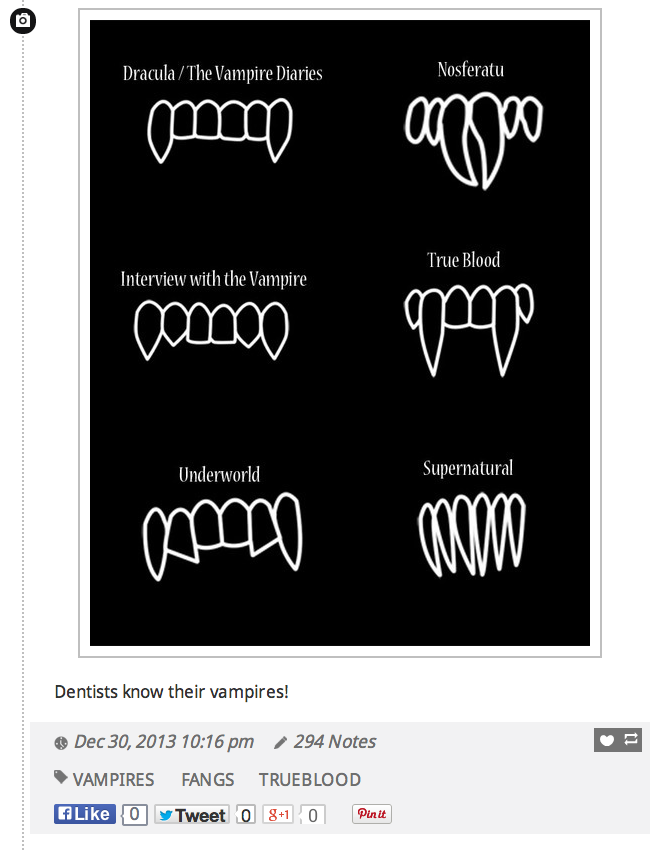 I also found this one while Googling “vampire signs.” Right away, it made me think of chart you would see on the wall at the dentist, not sure why. I quite enjoyed how it illustrates the difference between fangs whether we are referring to either TV shows or movies.

So did you figure out the pattern? Normally on Twitter, I like to include graphic bloody vampire pictures because let’s face it, that’s what the followers want! I originally used the same precedent for my Tumblr posts until I realized quotes and words tend to get more “likes” and “reblogs.”

I have also noticed that Tumblr is overflowing with GIFs. It blew my mind the other day when a GIF showed the torso of a man doing up his sport jacket that lasted about 5 seconds. It has nearly 1.5 million notes. Some things that trend are just so bizarre I tell you!

I tend to stick to anything vampire-related so I am sure there is a lot of shit out there I am missing, but in my defence there is no way I have time each day to rummage through Tumblr in depth.

I am proud to say as of writing this article our Tumblr account has 125 followers and is growing daily! I would love to see you all there so make sure to check Vamped out for some #fangtastic #vamped #vampire #blood posts. Happy tumbling and tweeting everyone!