After my “5 Recommended iPhone Vampire Apps” article was published, many readers asked, “What about Android apps?” I admit that I’m an Apple girl and don’t favor Android products at all. I find them annoying, dysfunctional and not user friendly. I could go into specifics, but who wants to hear me rant and bitch about technology? But for our readers’ sake, I borrowed a friend’s Samsung phone and ventured into the Android world in search of vampire app goodness.

I went to the Google Play Store and typed in “vampires”; it only came up with 252 apps as opposed to the 1,639 offered by Apple. Again, I stuck with free apps, partially because I couldn’t be bothered to set up an account that I will never use again. I wasn’t looking for any type of app in particular; I just browsed through the list, picking out what caught my eye. Most people who know me personally understand that means “words” popped out at me. Before I continue, a heads up: not all apps may be available in your country, so check local listings. Now let’s see what Android has to offer you vampire enthusiasts! 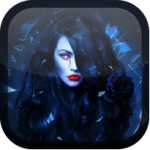 I figured I would try something different with this one and find some cool wallpapers, but I was sadly disappointed. When you open the app it automatically defaulted to rate this app, share this app, or set wallpaper. I go to set wallpaper and it only gives me the choice of the picture shown on thumbnail. So I tried clicking on “set wallpaper” and it bounces to a new screen asking me to download the app “Square Register,” an android card reader for credit cards. You close that it goes back to the same pic again. I tried a few times and just kept going in circles so I gave up. I know I am familiar with Apple products, but I have used Android before so I don’t think it was my stupidity in this case. My advice is don’t waste your time with this one! 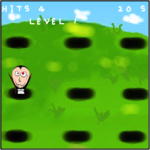 I picked this app because as a kid, I remember the game Whack a Mole being good fun. I guess you can’t have huge expectations for a simplistic game like this. It did what it said; a vampire popped up and you smacked him. The graphics bothered me because the vampire popped out of the grass on some holes so the alignment was majorly off. I also figured the game might speed up to make it more challenging. No dice! This is a mindless game and will entertain you for few minutes till you get bored, but the biggest piss off was the little “more” button that they neglect to show on the screen shots on the Google Play Store. If you touch it when trying to whack the vampire, it takes you to a new screen where they flog a another game. 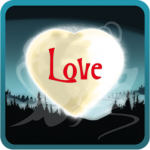 This one is more for the girls I think, but hey you guys can give it a shot too! This app looks like they took their regular love test and padded it with the vampire element. I was happy; at least this app worked properly and had no technical difficulties. On the first screen your options are: vampire tests, calculator, test, tender words, donate or more games. I went straight for the goodies and chose “vampire tests.” You had 3 tests to choose from: werewolf, vamp or human, who’s your perfect love match? Which species would you be in a vamp movie? Which vamp girl are you most like when it comes to love?

I went the girly route and picked “Which vamp girl are you most like when it comes to love.” Now to be honest, I had an idea of the direction this was going, and I was totally right. You get to pick an avatar and then answer 10 questions. Here’s the result I got:

Look out Bella there’s someone on your tail! You almost mimic this romantic character in real life. You know exactly what you want and you’re determined to get it. Nothing will stand in your way! You are so sure about the way to lead your love life, it almost makes other nervous. Don’t listen to them – you go girl!

I think this app would be popular with teenage Twilight-obsessed fans, but otherwise nothing special and your time could be spent better elsewhere. 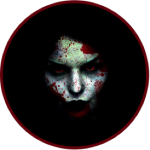 This app basically let you set your phone up to get a call from a vampire each day. Whether you wanted to use it as a get out of jail free card on a date, or just for fun with your friends and trick them into thinking you have some vampire connections. You can tweak the settings and set up the days, times and even ringtones. The default tone is a creepy forest ring tone with some organs going on. Feel free to have a vampire call you on the hour all day if you want to, the possibilities are endless! When the call comes in it looks just like one of your usual friends, but shows a picture of a vampire with a fake phone number. You can change the name if you want.

Note: during writing stages this app was available on Google Play, but no longer seems to be available, so I have supplied a link to its Distimo listing in lieu of its original link to Google Play. Hopefully, it resurfaces again. 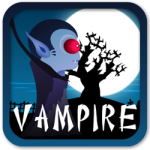 This app was by far my favorite one. You get to be a cute little vampire guy with red bug eyes who is searching for blood potions, not humans so there is a little change up going on here. It was easy to navigate; you just tap the screen when you want him to jump so someone like myself that sucks at video games can play! The object is to collect as many potion bottles as you can as he speeds across the screen. The only obstacle is you have to miss the crosses. The more potions you pick up and crosses you miss, he builds up speed. The goal is to get as far as you can in the allotted time.

You tap the screen so he can jump over the crosses, but you need to pick up as many blood potions as you can grab. The more you grab the faster he goes. He zips along at phenomenal speeds until you hit a cross and builds up again. Pretty fun but not enough to keep me interested long. If you collect enough potions you get a power boost and turn into a little ball of blue fire and go warp speed.

It was interesting to find Vampire Solitaire II (2014) on offer, after covering the first instalment in my iPhone apps article—except there seemed to be no real difference between them, apart from the developer’s name: xujinyi instead of Yongjian Xu.

One app definitely not worth your download space is Securenet Systems Inc.’s Vampires Radio (2012). I downloaded it, yet when you open it, the stupid thing just kept coming up with an error saying it was attempting to stream. I closed the app and tried a few more times hoping it would quit tweaking out, but in the end gave up and moved on.

ikiroki’s Vampire Bite (2012) was probably the worst app I’ve tested so far. The game’s description says, “You can FEEL what it is like when you are bitten by a Vampire. And he is going to give you a comment too. This app is just for fun. You can touch the screen with your neck.” Seriously? They expect you to put a phone to your neck? After it bites you the screen flashes, “Join us now.” That’s it! I am just glad this was free and I didn’t pay for it.

I found the Android apps on this operating system had way more ad pop-ups, linked pages and to be more awkward to use in general. With Android, it seems like any idiot can upload their homemade app. The process doesn’t seem to be as well-regulated as Apple’s app review process, which help ensure apps are reliable and perform as expected. They review all submissions and evaluate based on technical, content, and design criteria. I think that’s why you’ll find a lot more crap on Androids versus Apple products.

I know I’m biased being an Apple girl, but my overall experience with the Android phone and apps wasn’t that favorable. I think Apple offered better choices and quality, but to each their own. I know some people frown on Apple products; it all comes down to personal preference. Well, if I had to compare the two app store options available, Apple wins this one hands down! In the meantime, give Vampire Night a go and happy downloading everyone!