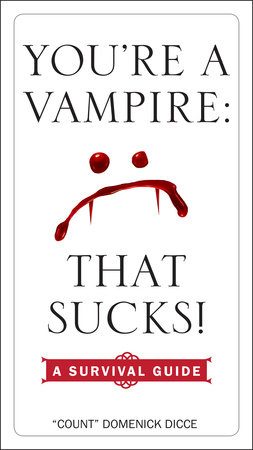 It doesn’t have to be highbrow or lengthy for a book to be thoroughly entertaining. This little guide—which was provided for review—takes a jolly little trip along the highways and byways of the media vampire (with a sideswipe at those who believe themselves to be vampires—“they just give vampires a bad name”). It is irreverent and funny and a swift little read.

It also does something within its pages, and that is enter a new naming convention into the media vampire lexicon. I give you “zoogan”—vampires that feed on animals and not humans. Cracking, and hopefully to become common parlance (it makes more sense than suggesting they are “vegetarian vampires”—unless they are Duckula or Bunnicula).

We get, as well as discussing feeding habits, a look at vampire weaknesses and powers, a discussion on finances, the necessary talk about coffins. It’s all good fun.

Comedy is, of course, highly subjective. But this one tickled me. Remembering it is a slim volume, a few hours read at most, and a novelty item at best this still deserves a fun 8 out of 10.

Domenick Dicce’s book is available through Amazon in paperback and Kindle formats. Visit his website for more information: http://www.domenickdicce.com/