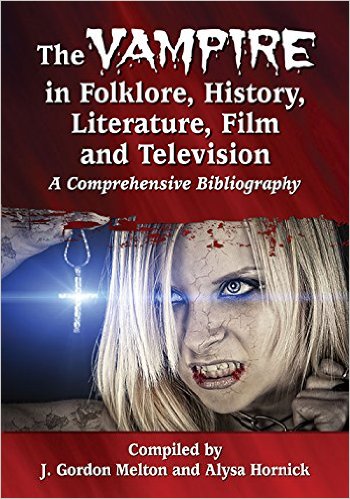 This is a virtually impossible book to review and I will explain why later.

The book starts, after introduction pieces, with a vampire timeline. This I felt was lacking. It starts in 1800 and goes through to 2013 but it is notable for missing aspects rather than anything else. Harsh? Not really, as a true vampire timeline would have taken the length of the volume. However I felt as though there were important entries missing (especially in the 19th Century area).

But I have read “Christabel” several times and failed to see a vampiric aspect. If you think I am wrong then I’d welcome your comments but please highlight which part of the poem you believe is vampire related, when you do, and why.

But back to the review. Melton’s timeline is far from the main event, but the main event is why this book is virtually impossible to review. The main event is a detailed bibliography of papers and books referencing and exploring vampires in the disciplines listed in the title. Split into sections make for ease of reference for the user as does a comprehensive index. This realistically cannot cover everything but is pretty darn impressive.

For the student of vampirology this then becomes an invaluable guide to/list of vampire material. For someone like myself it is invaluable, but for anyone whose interest is more casual it is just a long list of books and papers. For that reader it doesn’t even explain the content (though the general area is obviously connected to whichever section it falls under).

For the casual reader it is expensive and (dare I say it) pretty darn worthless. If you are one of those for whom it is designed then the meat of the work is invaluable. As such I am not going to score this but will say that for the serious vampirologist it is essential.

The bibliography is available through Amazon in paperback and Kindle formats.

Melton was the keynote speaker of the vampire studies symposium. See: Erin Chapman, “I Attended a Vampire Studies Symposium. Here’s What I Learned,” Vamped, Dec. 23, 2015, http://vamped.org/2015/12/23/i-attended-a-vampire-studies-symposium-on-halloween-heres-what-i-learned/.