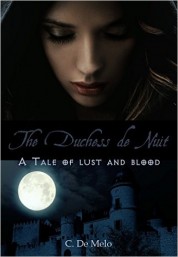 Starting in a modern setting we meet Angelique, a vampire who has just been extracted from a “punishment coffin”. The time she spent locked away was meant to punish her for a crime and break her spirit and her sire, Arsham, is expecting just that. So her flight from him, into the night, was unexpected. She searches out a lover, Damian, but then the author takes us back in time.

The book then follows Angelique through her mortal life, her arranged marriage to an abusive husband, a duke, and her being rescued from him by Arsham and turned. The eighteenth century section is quite involved, the nineteenth century section a little less so and then the book flows back to modern day for the climax.

Arsham chooses who he turns based on their unique talents and/or attributes. His reason for turning Angelique (beyond her beauty) is due to the fact that she can detect shapeshifters. The author builds a world where vampire hunters search out vampires with the help of shapeshifters.

The language puts this in a modern gothic bracket with a fair amount of nicely-judged melodrama. The dialogue is mostly convincingly written with the very rare turn of phrase that perhaps seemed a little more forced and this keeps the reader connected with the story and the characters. The book was nicely paced though there were a couple on incongruities within they were minor.

There is an edge of romance to this as well but I also felt it owed a tad of a debt to the Underworld film series and whilst the forbidden love was between slayer and vampire (as opposed to the core story of Underworld) there was just an air in the modern settings that made me feel that way. As such the book had layers of action as well as the romance. 7 out of 10.

C. De Melo’s novel is available through Amazon on Kindle. You can also visit her website: http://cdemelo.com/.