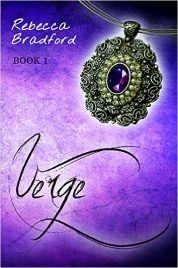 Less a novel, more a novella, Verge is definitely within the teen, young adult arena of books. It follows the character Ashleigh Palmer as she changes with her 18th birthday and so, in many regards, is a parable of turning to adulthood.

In this case she becomes a vampire, however. She had believed her natural father to be dead (but never questioned the anonymous and generous cash gifts she received annually on her birthday) and in some respects he is—being one of the undead. Her mother had been warned that vampires rarely prove fertile, but Ashleigh would either become vampire or stay human on her eighteenth.

Given the changes that come upon her—and it is these that the majority of the book concentrates upon—she has to be introduced to the secret world of vampires. The vampires are faster, stronger, have better senses etc. An odd addition to the lore—given the minimising of much of the negatives—was the idea that holy water burns a vampire. This didn’t sit well with the societal changes the vampires have made (don’t kill humans etc) nor did it sit well with a generally good and humanely innocent girl becoming a vampire for no reason than the relationship her mother had that led to conception.

This felt, therefore, more a plot contrivance within, what is essentially a wish-fulfillment story (Ashleigh’s transformation gives her personal insight eventually, the college course she wants, wealth and love). If that sounds like a criticism, it isn’t—a wish-fulfilment story has its place and the target audience would likely eat it up. The supernatural element allows a level of peril to be injected into this.

The writing is fairly consistent—though some of the dialogue is a tad awkward but Bradford will develop this aspect, I am sure, as she develops as a writer. The short length means it doesn’t outstay its welcome, on one hand, but does mean that it is difficult to develop a deeper substance in the prose that would perhaps attract a more mature audience. This will be a good basis to work from—it does feel like the opening of a broader story. 5.5 out of 10 reflects a solid score for a new writer whose work has room to develop but will certainly find appeal amongst the target audience.

Verge: Book One is available on Amazon in hardcover, paperback and Kindle formats.

Rebecca Bradford is currently writing Delve and Quell, the other installments in the Verge Trilogy.