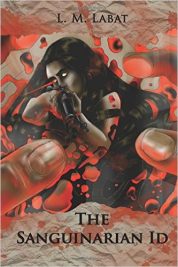 L. M. Labat’s first novel, The Sanguinarian Id, is an ambitious work that stretches from the nineteenth century, through into the Second World War. It is also a book very much of two parts.

It starts in an asylum for the insane in which we meet the doctors Strauss and Mendelson, deeply flawed characters—and reflecting the brutality of the time—these Doctors are likely to torture and abuse their wards in the name of treatment and just to satisfy their perversions.

Into their world comes Hael, a mysterious child found with a head injury. Mendelson becomes obsessed with the girl and arranges to have her transferred to a school he runs but she is rescued by the nurse Ondine Brimfield—as much a herbalist as a nurse. The book jumps forward in time to the nurse’s death and Hael, now a young woman, learning some truths about her life. This section is very much a prologue to the main tale but I did say this is a book of two halves and whilst it is not half the length, as such, content-wise it is its own beast.

I was struck in this section by the language Labat used. One might call it gothic or stylised and it was perhaps a little too flowery for some but I felt it added to the sense of mystery being drawn and added an antiquated atmosphere that suited the story and period. There was the odd use of language that felt a tad too contemporary but these were few and far between and I was impressed by the naturalistic feel of the dialogue—a point where many new author’s struggle.

The book then jumps into the Second World War and I felt as though I was rushed to this section, probably because I felt that there was much more to explore within the opening. Hael is hunting across Nazi Germany, with a partner called Josef, for Mendelson. She knows little about her origins but she is a dhampir. Josef is an alp and there is an entire sub-culture of vampires of various breeds (we also get nosferatu, umpires and nachzeher). One interesting type added was a gaki. In Japanese myth this is a type of hungry ghost and some sources do tie it into vampirism.

Once this section gets in to its stride it is a satisfying supernatural adventure, however I felt rushed again, at first, and there is much more in the opening that warrants expansion and further exploration. The feeling of being rushed, whilst it might be construed as a negative, is positive in that I enjoyed the book as is and believe expansion would enhance the reader’s experience. I felt that the prose lost some of the more Gothic aspect that infused the 19th century section, though the language was solid I kind of missed the more elaborately drawn narrative.

Finally, I have to mention the illustrations in volume (and the cover). All illustrations were by Labat, are beautifully drawn and augment the text well. All in all, this was an impressive debut and I am interested to see where Labat takes the story. 7 out of 10.

The Sanguinarian Id is available on Amazon in paperback and Kindle formats.

L. M. Labat is currently editing The Sanguinarian Id II. In the meantime, you can visit her website: https://thesanguinarianid.com/.