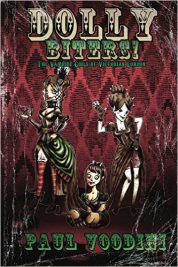 Dolly Biters is a volume containing two novellas and two shorts by Paul Voodini, and though set in the same universe, the vampirism varies from story to story as we will touch upon, and as the author expands upon within an in-book interlude.

The Dolly Biters are “made” vampires in 1860s London, who have established a dangerous presence in Spitalfields and we meet them in the first tale—which follows newly-turned Irene, who, unlike the other girls, came from a privileged background before being turned.

The turning process seems to affect any female who is not fully drained—male victims never turn. Therefore, the only male vampires are High Borns (natural vampires who can be male or female). This way Voodini has a two tier (class based) vampirism with those who are a separate species and can breed and those who are turned—perhaps by a virus. But it also introduces a gender politics narrative that, whilst perhaps not explicitly exploited, is certainly there as an undercurrent.

The turned vampires are fanged, have mostly dark hair, pale skin, long fingernails, red eyes, pointed ears and elongated (sometimes forked) tongues. This is contrasted against the High Borns who can pass for human. The other thing that seems to occur is a coarsening of language, a ramped up sex-drive and instant lesbianism. If someone drinks a High Born’s blood (this isn’t tried with turned blood) they are telepathically linked and the blood can pass on temporary vampire attributes (strength and speed). They seem to be fast-healing, though eyes (and thus other organs we assume) do not regenerate.

The second novella jumps to 1888 and the turned vampires, whilst still only female, lesbian and killed in the same manner, no longer appear to have the red eyes, primarily black hair and pointed ears. Their need to feed has been decreased from every night to once every three and sharing of blood forces extreme feelings of love on the imbiber. The author suggests (again in the interlude) that the vampire virus had mutated.

We do get werewolves, Vatican hit men, a rather different version of Sherlock and Mycroft Holmes and a trip through the looking glass. We discover that, later in the 19th Century the Government insisted that vampires belong to hives (as a form of Governmental control).

I was interested in the author’s take on what happened to the victim. The vampire seems to gain the victim’s memories and, in certain cases, we see them interacting with victims after the fact. The vampires suppose this is because they take the victim’s soul into themselves and merge it with their own and this would seem to indicate soul-eating.

The language was crisp and eloquent with a nice spattering of profanity and a liberal dose of sex that offered a Eurohorror aspect. The break into novellas and shorts allowed plot to be carried nicely along—the final short being somewhat psychedelic in nature and therefore much more poetic in nature (and indeed it does contain verse as well as prose). The inclusion of famous literary and historical figures was nicely done. 8 out of 10.

This was a review of the proof edition. Dolly Biters is available on Amazon in paperback and Kindle formats.