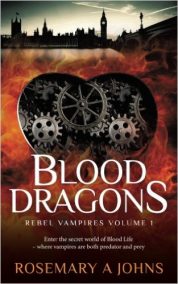 Honestly, I didn’t know what to expect from this first volume of the Rebel Vampires series. The blurb made me think within the realm of paranormal romance but, to be fair, it is certainly more than that—with a good undertow of drama, even thriller.

There is romance. There is the end of a romance in fact as we meet vampire Light who is caring for his mortal love, Kathy. She has dementia and is dying of old age and we focus on that oft mentioned but rarely examined “elephant in the room” when it comes to mortal/immortal love.

The book itself is primarily Light telling his story—him, his Elizabethan maker (and lover) Ruby and Kathy. What really made the book for me was the distinct voice she gave Light. Now, at first, though fun I was reminded of the character Spike from Buffy the Vampire Slayer. Both English, both Victorian, both socially awkward, one becomes punk the other becomes a teddy boy/rocker. However, I am doing the character a disservice because whilst I felt that way at first, Johns quickly and strongly established her own character. There is also a deliberate soupçon of A Clockwork Orange—which Light does tell us is a favourite novel.

The vampirism has its own feel, through language as much as anything. The world of the vampires is split between First Lifers (humans) and Blood Lifers (vampires). Blood Lifers see themselves as something beyond human (mostly—the 60s paradigm shift convinced Light that there was a smaller difference between the two and, of course, fell in love with Kathy. Their bite injects a venom that has two effects—it paralyses their prey and then kills them (simulating myocardial infarction). How turning occurs is not explained but it is a deliberate choice and the new vampire is said to have been elected. Sharing blood from the same victim is a form of vampiric intimacy, sunlight will melt the vampire, failure to feed as necessary is ultimately deadly and any piercing of the heart will kill.

So, a strong opening book—with hints of a vampire society/ruling body that we haven’t and so plenty of room to work a further series through. The strength of this volume resides in the voice given to Light and the volume itself deserves 8 out of 10.

Blood Dragons is available on Amazon in paperback and Kindle formats. The second volume of the Rebel Vampire series, Blood Shackles, will be released to Kindle on November 1.

In the meantime, you can visit the author’s website: https://rosemaryajohns.com/.