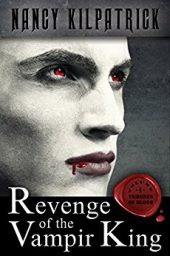 Nancy Kilpatrick is no stranger to the vampire genre. Indeed she has written and published a veritable mountain of vampire related works. Revenge of the Vampir King is therefore the latest in what is a highly-regarded pedigree.

I received a “wee warning” prior to the reading, from the author that “this is adult vampire: violence, sex, evil within the pages.” Well that certainly wet my appetite. What I wasn’t expecting was the debate in my own head as to the setting of the book.

As it began I assumed it was a fantasy setting, with a necropolis like vampire city built into a distant mountain and a human city that had just been raided by said vampires. The vampires call themselves vampirii and the humans are called Sapiens. The Vampir King of the title is a half-breed, his father impregnating his human mother and turning her only after the birth. The majority of vampirii are turned Sapiens and, physically, they all seem to sport permanent wings. They are susceptible to sunlight.

However, as things progressed, I realised this was less a fantasy world and more an alternate world. It is suggested that Sapiens’ recorded history goes back to 2500BC and the Epic of Gilgamesh. Christ is mentioned as a historical figure who said “Take Eat, this is my body, drink, this is my blood,” and, mistaken for a vampir he was executed by crucifixion. What time period are we in? The book does not tell us but a character is told to check his watch—the clock-watch dating, in our world, to the 1500s and the mass production of the wrist watch to the 1920s. Perhaps, a little like the Gormenghast series, this is a setting that feels medieval but will later be revealed to be futuristic. What we do know is that there are other Sapien and vampirii settlements.

There are caverns where ghosts whisper to the vampirii, something which could drive them mad and makes for a safe bolthole for the humans—I want to know more about this and I am sure this will form an underpinning to future volumes. I also want to know more about this world; where (in time) are we, how has the world diverged from ours and what is the world like beyond the narrow view (of the two cities) that we so far have had?

As an opening this is a great start, with intriguing backgrounds and I hope we will learn much more. 7 out of 10.

Revenge of the Vampir King, the first volume of Nancy Kilpatrick’s Thrones of Blood series, is available on Amazon in Kindle, hardcover and paperback formats. The second volume, Sacrifice of the Hybrid Princess, will be out in Fall 2017.