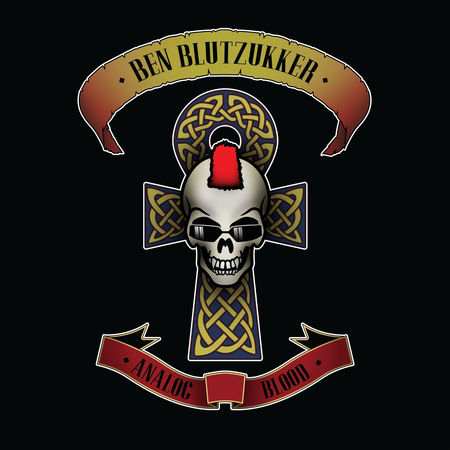 As this is my first music review for Vamped, as a matter of disclosure, I should tell you that I have a rather eclectic taste in music. It ranges anywhere from blues, jazz and alt-country, touching into metal, dashing through some electronica and industrial, into folk and neo-folk, flying through prog rock, dark cabaret and the avant-garde, with (various forms of) rock and punk always firmly in the crosshairs. Asked to narrow down to a favourite genre I’d always settle on Goth/post-punk.

Ben Blutzukker is a German musician who was bass player with thrash metal band Jormundgard before concentrating on a dark-electro project Blutzukker. This new EP sees him return to metal and sports a Guns n’ Roses reminiscent cover—deliberately so, I understand, though the music within contains no similarity.

In fact, as opening track “Walpurgisnacht” started my mind was drawn more to Diamond Head, the opening riff bringing “Am I Evil?” to mind. Definitely, and firmly, in the heavy metal camp the riff moved along nicely with an old-school feel. I mentioned taste in music above, I didn’t mention that a lot of modern metal’s tendency to shout rather than sing generally leave me cold. It sometimes works, it mostly doesn’t for me. Ben, was certainly on the growly end of the spectrum but we weren’t into that unintelligent growl or shout and that was, of course, no bad thing. The song itself concerned itself lyrically about witches/witchcraft and a (Walpurgisnacht, of course) witches’ sabbath.

The next track, “From Hell,” had a little less of the driving riff of Walpurgisnacht—certainly through the verses, not so the chorus—feeling sparser as Blutzukker showcased lyrics based around the letters of Jack the Ripper. Now, you’d be forgiven for wondering why the EP is on Vamped at this point. Two songs, two horror themes, but nothing vampiric. However, the last two tracks are vampire-related.

“Digital Blood” had more a classic thrash feel in parts, with Blutzukker shifting the rhythm up and down, the guitars chugging along nicely. Lyrically we are taken through the hunt, exsanguination and the vampire trope of blood as a drug is played with. This is followed by “Red” where a vampire contemplates turning the lover that he craves, replete with thee and thy peppered through the lyrics, which was a tad hokey. Musically perhaps the weaker of the four tracks for me.

So, there you have it—Analog Blood by Ben Blutzukker—most definitely heavy metal, mostly harking back to some of the classic metal and thrash of the 80s and 90s, with a vampiric theme.

If you’d like to purchase Analog Blood, visit this link for various options: http://hyperurl.co/AnalogBlood.

Feel free to check out Ben’s website for more information about his music: http://ben.blutzukker.com.