Vampires are among the oldest creatures on record. Almost every culture contains legends with a variation of them, in some cases dating back millennium.

Ever since the publication of Bram Stoker’s Dracula, popular culture has embraced vampires. Today there is a wide diversity within the genre, more so than with any other monster.

The gambit runs the range from Anne Rice’s angst-ridden Lestat and Joss Whedon’s vampire with a soul through undead societies trying to coexist amongst humans like in Charlaine Harris’ The Southern Vampire Mysteries or Alison Beightol’s The Primigenio Tales.

The undead have even found a growing niche within the young adult culture. Even though I’m not a fan, no one can take away from the success and popularity of Stephanie Meyer’s Twilight saga or Richelle Mead’s Vampire Academy series.

However, my preference is for the traditional, bad-ass vampires.

You know the ones I’m talking about. Nosferatu, with his rat-like visage and taloned fingers, rising perpendicular out of his coffin or rigidly stalking his victims.

The mutant bloodsuckers from Guillermo del Toro and Chuck Hogan’s The Strain trilogy who strive to turn humans into blood cattle. And my favorites, the pack of vampires that prey on Barrow in 30 Days of Night, hunting humans for sport like they were deer.

One of my favorite vampire moments is when Marlow responds to a victim’s pleas to God for mercy by looking at the heavens, back at the victim, and replies, “No God.”

These are the undead that make us jump in the movie theater, compel us to keep the lights on after we close the book, and make us look over our shoulder when walking along a dark street at night.

The reason we fear vampires derives from the same reason we also admire them – they represent our basest psychological urges. Bram Stoker created the character of Dracula to shine a negative light on the sexual repression of Victorian society. Since then, vampires have come to represent us once the moral and psychological restraints have been removed and we can give free reign to the lust, violence, and narcissism buried deep in our psyches.

There is an innate eroticism to the act when Alexander Skarsgard, Gerard Butler, Frank Langella, or another sensually handsome vampire turn beautiful women. We get a secret thrill when the undead terrorize their way through mankind, whether it’s an isolated vampire on a military base in South Korea or a more global apocalypse in David Wellington’s Bullet series.

When we relate to vampires, it’s because we want to get rid of those inhibitions within ourselves. When we’re scared of vampires, we don’t fear them because they’re monsters, but because they shine a light on our inner selves.

I only made that connection later in life when I was older and (rumor has it) wiser. As a Monster Kid, vampires fascinated me because they were cool. I grew up watching the Universal cache of bad guys, mesmerized as Dracula and Frankenstein terrorized their way across Germany. But what kept me glued to the television screen was whenever CBS Friday Night at the Movies broadcast an old Hammer vampire movie.

The only thing better than Christopher Lee’s snarling rampage through a village (or the buxomy vampiresses he sired) was watching Peter Cushing as Van Helsing battle the bloodsuckers.

Cushing never killed Dracula the same way twice. Sure, all the brides died with the traditional stake through the heart, but he reserved a special demise for the master.

Whether Cushing would slide along a table and rip the curtains off the window, or turn the blades of a flaming windmill to form a cross, he always found a unique and exciting way to kill off the main vampire. And he accomplished his task with the same stoic professionalism in every movie, as if he was born to hunt vampires. He was my action hero before they even became popular. 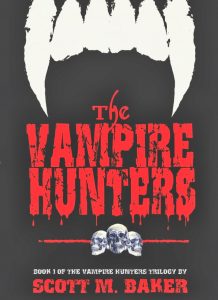 It was my love for Hammer’s evil vampire/heroic hunter dynamic that eventually led me to write The Vampire Hunters trilogy. My hunters are taken right from Peter Cushing’s playbook, being tough, action-oriented characters who engage in a life-or-death struggle with the undead.

What I really enjoyed writing, however, were the vampires. It gave me a chance to develop vampires that were pure evil with no redeeming qualities, who view humans as nothing more than sexual conquests or a hot meal.

Unlike so many other vampires who are merely two-dimensional figures, mine are complete characters with personalities, back stories, and their own desires. They are an integral to plot as the hunters. I don’t necessarily want readers to like my vampires, but I want them to have an emotional stake (pun intended) in their fates.

Despite what some critics predict, the popularity of vampires in today’s culture will never wane. Certain themes may take center stage for awhile, and that’s a good thing because, no matter what brought you into the genre, once you are hooked on vampires there’s no going back.

So shut down your computer and go to bed (remember, vampires cast no reflection, so you can’t see them in the monitor if they sneak up behind you). Then grab a nice vampire novel and enjoy being scared by things that go bump in the night.

The first book in Scott M. Baker’s The Vampire Hunters trilogy is available on Amazon. He’s available on Facebook and Twitter. Be sure to check out his website, too.