Did you know we’re on Pinterest? Probably not, because I haven’t promoted it (until now). If you’re wondering “What the hell is Pinterest?” it’s a social media site, or, as Wikipedia describes it, “a visual discovery tool” where you can

collect ideas for projects and interests. Users create and share collections (called “boards”) of visual bookmarks (called “Pins”) that they use to do things like plan trips, develop projects, organize events or save articles and recipes. There is also a like feature to save certain pins that may not fit with a board.

I created Vamped’s Pinterest account on January 22, but haven’t really done anything with it. Been too busy with other things and—to be honest—didn’t really know my way around it. Well, today, I decided to change that state of affairs. I asked David MacDowell Blue to be our Pinterest co-ordinator. I’m pleased to announce that he’s graciously accepted the role. 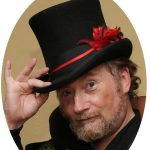 In case you’re not acquainted with David, he edited The Annotated Carmilla (2011) and wrote Striking a Chord: A Look at Harry Potter, Twilight and the Hunger Games and Your Vampire Story (And How to Write It) (both 2012). He’s also a freelance writer for Vampires.com.

And a playwright, too. Earlier this year, his theatrical adaptation of “Carmilla” was staged at Zombie Joe’s Underground Theatre, North Hollywood, from February 21–March 29 to good reviews. The adaptation’s script, Carmilla: A Play in One Act (2014), is available on Amazon. Here’s the play’s website.

David dabbles with graphic design, too. I turned to him when I wanted banners for my Facebook page and groups. His contributions and involvement with the groups and pages lead me to appointing him co-administrator of the Count Dracula Facebook group, which presently has 1,914 members.

But the specific reason I approached David to be our Pinterest co-ordinator is because I’m impressed with his own excellent Pinterest page. It’s full of goodies and I figured his experience and eye for pretty pics would be greatly beneficial to our (until today) barren account.

I asked him how he felt about being offered the role. “Happy to be of help to further the cause of hemovorephilia!” he said. Gotta love that enthusiasm! So, welcome aboard, David. Great to have you on the team.

If you’re on Pinterest too, feel free join us. We’d love to see you there.