On July 19, I did something I’ve never done before: watched a silent film from start to finish. I have nothing against old black and white movies; in fact some of my all-time favorite films are from the 1940s, like The Philadelphia Story (1940), His Girl Friday (1940), The Maltese Falcon (1941) and The Big Sleep (1946). So why did I decide to watch one now?

On July 16, Anthony and I were chatting on Facebook and he asked me if I’d seen Nosferatu, eine Symphonie des Grauens (1922): 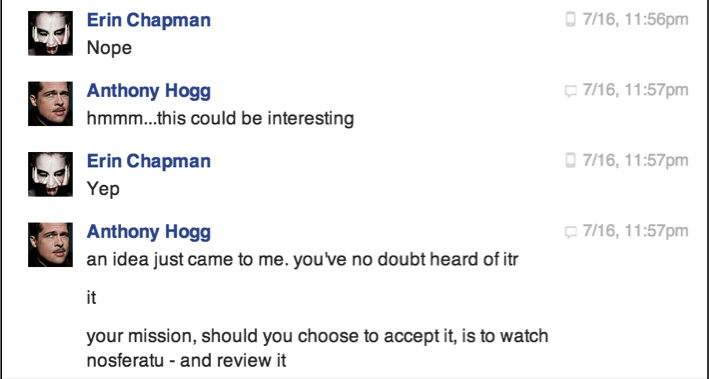 As you can see, I chose to accept his mission! There’s another element at play: this is my first film review. Anthony also set some conditions for writing it. I wasn’t allowed to read any reviews, look it up on IMDB or blogs, or even peek at the comments section on YouTube posting. He wanted virgin eyes for this one!

My only knowledge about the film was the usual photo you see of the vampire with the crazy eyes and fingers when you Google “vampires.”

On that fateful Saturday night, I curled up in bed with my iPad and immersed myself in the eerie world of Nosferatu. In case your virgin eyes want to check it out here you go!

You gotta love the crackling dead sound in the beginning as the credits shakily make their way up the screen. The music in this film instantly caught my attention and is what stood out the most. Occasionally, I found myself tripping out on it and not paying attention to the characters. It appeared to be a representation of classical instruments and what I could pick out were some flutes, violins, and pianos.

The challenge for the director was to integrate the music to create an ambiance accompanied by the character’s reactions and exaggerated facial expressions, which I have to say, look quite ridiculous at times. I understand the actors can’t speak, but they need to mix it up a little and cut the cheesiness down. I know they’re trying to convey a rainbow of emotions like fear, love, confusion, surprise, or happiness, but it all seems to be over the top so I’m finding it hard to take seriously.

In the scene where Jonathan tells Nina he’s going away for work, you can see she starts breathing heavily and looks like her cat just died. She has the glaring look of death down pretty well, which he totally missed and scoots off to go pack, floating on cloud nine from the news of his adventure. One of the best expressions I thought was when the deck hand went below on the ship and attempted to open the cargo and was petrified with fear when Dracula tossed the lid off the box and fluidly floated to an upright position. The actors in the pub when Jonathan shouts, “Dinner quickly! I should already be at Count Dracula’s castle” had pretty wacky expressions too.

Considering how long ago the film was made, I think the special effects are pretty damn decent. We have transitions for scenes with some fading to black going on using an open and close circle effect. They include some fake blood when Jonathan cuts his finger and Dracula practically attacks him. Or was it fake blood back then? Maybe he had to take one for the team?

What I found comical was when Dracula got off the ship and was randomly walking around town in broad daylight carrying an earth-filled coffin. Now I can understand him vanishing into thin air, but he did this while hugging his precious box. I know Dracula has some awesome powers, but did I miss the part when he got a pocket sized Star Trek transporter?

To create the appearance of driving, the black coach at high speeds they basically sped up the film. To enhance the effect Jonathan hung his head out the window quickly and brought it back in due to high wind velocity. They also used shadows quite a bit when Dracula was going after a victim and the stretched darkness enhanced the creepy vibe without an in your face shot. I admit the way Dracula emerged from the crate on the ship was pretty cool too.

The costumes and make up weren’t anything spectacular for the time, but the best and most obvious was Dracula. They went all out on him with the ears, fingernails, bushy eyebrows, lumpy baldhead, dark eye-makeup and his lovely teeth. Dressed in solid black and the long fitted coat made him appear abnormally tall and slender, especially when he walked slowly through the doorway in his castle. The oddest accessory was the fancy hat Dracula wore when he was doing paperwork with Jonathan. Sure I get the fact he was trying to hide his crazy ears, but it was like they twisted a towel up on his head.

The orchestrated mob that chased Renfield when he escaped the institution was quite comical, especially him sitting on a roof taunting his pursuers. For some reason the first thing that popped in my head when I watched this scene was the 1965 classic, Cat Ballou, starring Jane Fonda and Lee Marvin. In the beginning of the movie, they rob a train and the townsfolk gather and pursue the thieves in an amusing chase. This is pure association and a random thought on my brain’s part, but I highly recommend watching this film if you haven’t already. Oh, and I have to mention the narration for the film is done by Nat King Cole and yes folks he is singing!

The beginning credits indicate this movie is based on the novel written by Bram Stoker in 1897; however, I couldn’t say how close the adaptation is because I am currently reading the Broadview edition for the first time as well. The film appears to reference the same characters; just I am not sure on similarities between both versions. Jonathan seems to be flakier in the film and so does Nina, which we all know as Mina from the book. The name difference actually brings a question to mind. If the movie is based on the book why is the name changed? Also I noticed many of the cast have foreign names, so I am wondering where it was filmed? If the actors are no names then the budgets were kept pretty low.

When Jonathan stayed overnight in the inn on this journey to the count’s castle he found “The Book of the Vampire,” from 1443. He checks it out and laughs it off, thinking it’s ridiculous. Yet he does end up bringing it with him to the castle and even Nina finds it after he returns home. It is like the entire plot depends on this random mini book that just happened to find it’s way into his luggage for his entire journey by accident. Hell the only reason Nina managed to kill the vampire was because she read the damn thing, when she wasn’t supposed to.

It basically gave her instructions with the following excerpt, “Only a woman can break his frightful spell- a woman pure in heart- who will offer her blood freely to Nosferatu and will keep the vampire by her side until after the cock has crowed.” Her plan worked and Dracula teleported again into the beyond, leaving only a little trail of smoke behind, indicating he had perished.

I watch black and white classics because I enjoy the humor and witty dialogue and the fact that the plots are all dependent on the lack of technology from the time. So many plots can revolve around not having a cell phone! In the movie, His Girl Friday, I love the entire newspaper game is stationed out of one room in the courthouse where like 10 phones are situated for the reporters. I also enjoy the dialogue and bantering that goes back and forth, which leads to the explanation of why I didn’t enjoy this film.

In vampire Facebook groups, I have observed comments indicating this classic is a necessity to watch for any vampire enthusiast, but the whole lack of dialogue really put a downer on the mood for me. I know it’s not the actual story, because I can honestly say I am enjoying my Broadview edition of Dracula, so that indicates it is the film itself. I can now say I’ve watched it. Would I watch it again? Probably not! Would I recommend it? I think it’s only relevance is for research purposes into the genre.

I am assuming they have remade this movie because they redo everything, but thanks to Anthony I have no idea and I am just speculating. If there is another version I would be interested to see how it has transformed over the years. Maybe Nosferatu has gotten his hands on a better Star Trek transporter and this time around he could beam himself straight to England and avoid the whole boat cruise?