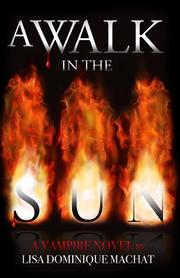 A Walk in the Sun
by Lisa Dominique Machat
Vampire Vinyards Publishing, US$21.99
Published Dec. 4, 2013

It was an honour to be asked back to Vamped as the reviewer of A Walk in the Sun but, when the review copy arrived, I must admit to having been thrown by the sheer size of the box. Imagine my surprise and delight when I discovered it also contained a complimentary bottle of Vampire Wine, Cabernet Sauvignon, and a branded wine glass.

I mention this by way of full disclosure to you, the reader of this review, and also to explain that this book was published by Vampire Vineyards Publishing and author Lisa Dominique Machat is a director of said vineyards. The wine, by the way, was lovely… the book…

It is a beautifully presented hardback novella but I was nervous—given the associations—when the back of the dust jacket had a quote from Nicholas Justine, the primary character: “Like Vampire Wine I drank his blood, full bodied and powerful. Just as the moon controls the sea, the claret of life controlled my body.” This is actually a constructed quote (a centre sentence is missing) and the word wine is not capitalised in text, but this just felt hokey, especially given the associations of the author and her own press.

Nevertheless I delved into the book and the story itself sees a young man, Nicholas Justine, who grows up in a lonely nineteenth century house—his mother died giving birth to him his father seems resentful of him. Just after his father dies, having fallen in love with a girl who was expected to marry another, he is turned into a vampire. Despite his new found condition, and the difficulties he has with sunlight and holy items, he and Elena run away to Paris. However there she attracts the attentions of a Satanist.

The setting in Paris, the vampire good guy (who does not feed upon humans at first and later only on the evil-doer) and the conflict with a Satanist brought the book Hotel Transylvania (1978) to mind—being the first of the Le Comte de Saint-Germain series by Chelsea Quinn Yarbro. Although this was set in a different period, it meant the book didn’t particularly feel that original, despite decamping back to Britain for a while. Although I will admit that Justine’s ability to created precious jewels on a whim and the fact that he could, through will it seems, heal others were certainly unusual additions to the lore.

I didn’t, unfortunately, buy the character’s background. His lonely upbringing, principally ignored by his rich solicitor father, would surely have been interrupted by the rigours of boarding school and university and yet he seemed, without such things being mentioned, to suddenly be a well-educated young man with pretentions of a literary career. His distress at discovering that his father truly loved him, but never showed it, seemed idealised rather than realistic. We never discover exactly why he is turned, though it is certainly no random act, and this could have stood more scrutiny.

As well as not buying in to the character I found the language to be somewhat too modern at times, given the setting, and the dialogue didn’t flow as naturally as it might, coming across as artificial at times and lacking in distinct voices. On a positive side the more action orientated moments flew along at a great pace, carrying the scenes well on the back of the prose.

This was not awful, the novella does not outstay its welcome—indeed I’d go as far as to suggest that some of my criticisms may have been alleviated by a longer work that explored the character’s background would have rounded the character and textured the world.

I may have criticised the dialogue, and it is an aspect of prose that is notoriously difficult to nail, but the more rounded the character, the more layers the author creates, then the more of a distinct and memorable voice that character would have displayed.

As the book stands, however, I think that 5 out of 10 is a fair appraisal. A nice fast pace when needed but needing more texture in the characters.