At 5:33 p.m. today, I was greeted by a disconcerting message in my Viber inbox: “So FYI you must have pissed someone off today.” Erin wrote. “Your ‘ask a vampirologist’ page was unpublished by FB.”

She added: “Says content violated their standards and they take action on all abusive reports. What did you do Anthony?” My response was somewhat more succinct: “What the fuck”.

What the fuck, indeed, because I don’t know what I did. Facebook certainly wasn’t forthcoming—except to tell me that I had a 12 hour block on posting anything. Here’s what I found when I logged in and checked my page: 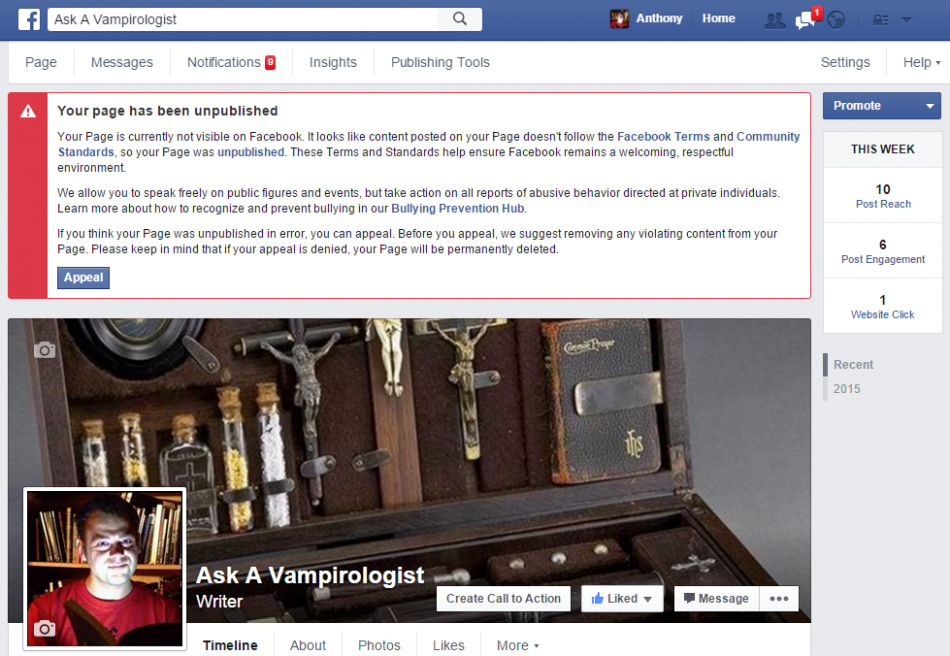 We allow you to speak freely on public figures and events, but take action on all reports of abusive behavior directed at private individuals. Learn more about how to recognize and prevent bullying in our Bullying Prevention Hub.

If you think your Page was unpublished in error, you can appeal. Before you appeal, we suggest removing any violating content from your Page. Please keep in mind that if your appeal is denied, your Page will be permanently deleted.

Beneath that message was an “Appeal” button. Naturally, I clicked it. If you want to know what the appeals process looks like, here it is: 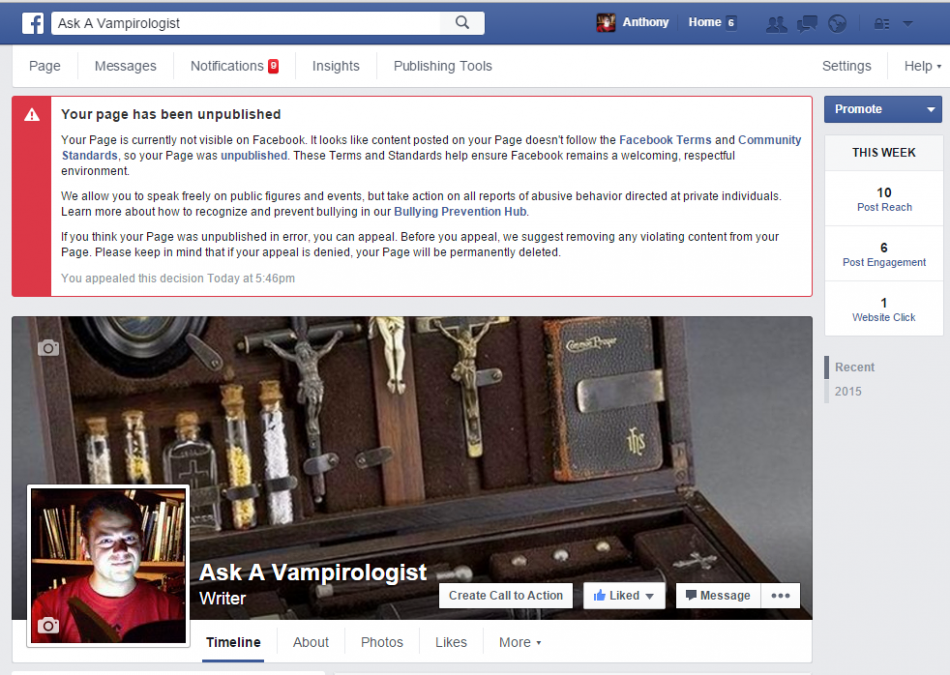 Not very helpful. As of this writing, I still don’t know which policies I violated. It’s a bit hard for me to meet their demands if I don’t know which content they’re referring to. The page’s content consists of blog posts I’ve written, headed by a Vamped interview Erin conducted with me in 2014. Nothing remotely offensive.

I haven’t been this mystified by a Facebook administrative action since the time Facebook suspended my account for three days after I posted a link to a blog dedicated to harassing me—as  an example of the way I’m harassed online.

Apparently, I had violated the harasser’s intellectual property, i.e. the link to the blog; never mind that the harasser in question had stolen a photo of me Hotmail account and used it in the blog. Surely this counts as another example, an abuse of Facebook’s reporting policies?

While writing this post, I found out who had reported me. Not long after I was made aware of the block and possible page termination, Erin told me about a guy named “Dare Bias” (I suspect that’s not his real name), who began spooling off nonsense in her inbox: “I have personal problems with ur [sic] admin for violating and using a female picture n [sic] all I knew. I am nor to give up till something happens . until then madam I will make things complex .”

His blackmail allusion became much more transparent in his follow-up reply: “I will be trashing the vampiric page till respect comes back to the madam and self. From Anthony boggs [sic] . soon I be teaching studies of mundanes and using ones [sic] personal lives to do so.”

The reason why I knew who she was referring to, is because Bias, a self-described “vampyre,” had previously contacted me defending the woman in question, someone named Noluthandoziphezinhle Ziphezinhle Zikhali, who had posted a thread titled “VAMPIRES ARE REAL DON’T BE MISLEAD BY ROLE PLAYERS” on the Vampire Community Facebook group.

The day before, I called her out for fakery, specifically her attempt at claiming ownership of a photo posted in the thread as one she had taken “last night,” which she submitted as proof of the existence of vampires.

However, a reverse image search through TinEye revealed its origins from several years ago—specifically a 2010 crime involving New York cab driver, Mamoud Seck, repeatedly being bitten by a robber (the “vampire” in question) during a struggle.

After Erin asked whether Bias had reported her page to Facebook (“Ask a Vampirologist” is jointly admined by me and Erin), he admitted: “Oh yes I have madam for ones has disrespected ones I knew and invaded her    privacy as well as I gotten disrespected by  anthony hoggs [sic].”

Bias’s spiteful, manipulative use of Facebook’s reporting process illustrates a major hole in Facebook’s system: their reporting policies are easily abused by people trying to “shut down” users for malicious purposes.

In one notorious case, Article 19, a free speech advocacy group, had a post featuring a link to a Human Rights Watch report detailing torture in Syria removed from their page: “Facebook did not explain to Article 19 why it had deleted the material, but told the Guardian that the post was mistakenly removed after being reported as containing offensive content.”

This event happened three years ago, and it’s clear their procedure hasn’t changed much. The article elaborates further:

A spokesman for Facebook said the post was mistakenly removed by a member of its moderation team, which receives a high volume of take-down requests.

Facebook said in a statement: “The link was reported to Facebook. We assess such reports manually and because of the high volume, occasionally content that shouldn’t be taken down is removed by mistake. We’re sorry about this. The organisation concerned should try posting the link again.”

But [Dr Agnes] Callamard [executive director of Article 19] complained that Article 19 had received no explanation or warning from Facebook before it took the material down. The group only received a pop-up message that read: “We removed the following content you posted or were the admin of because it violates Facebook’s Statement of Rights and Responsibilities”.

Callamard said: “The deletion shows the looming threat of private censorship. We commend Facebook for creating tools to report abuse, but if your post was wrongly deleted for any reason, there is no way to appeal. Facebook don’t notify you before deleting a comment and they don’t tell you why after they have. Facebook act like judge, jury and executioner.”

Let me make this clear: Facebook’s anti-bullying stance is admirable and definitely needed. The problem is, it’s just as easily abused by bullies and malicious claimants, too. If Facebook is serious about cracking down on abusers, they need to rethink their reporting process so it’s more transparent—and fair—to the accuser and accused.

As you’ve seen, their appeals process is a joke; how can you appeal a threat to remove content, and an entire page, without even knowing what the “offensive” content is? How can you trust that the process will be fair, if the reporting process is already skewed in favour of the claimant?