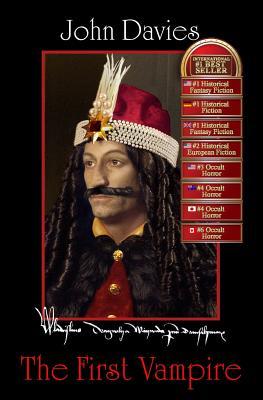 I am, you will see, torn over this volume—which the author provided for review. But before I explain why let us get in to the Vlad Țepeș (1431–1476) angle for it is clear, even from the book cover, that we have a “Vlad as a vampire” novel here.

I stand firmly by the belief that Bram Stoker’s seminal creation was an amalgam character with a smattering of Vlad Țepeș’ history (from one paragraph and a footnote) and his name, “Dracula,” borrowed. That said I realise that the voivode has now been indelibly linked with vampirism in the modern collective psyche and I am open to “Vlad as a vampire” stories.

In the opening pages of this volume the author gives us a series of facts, in which he suggests that “The sources of Stoker’s information have only ever been speculated upon.” Actually we have a better understanding of Stoker’s sources and thought processes than most authors as he left detailed notes that are published and available, and we know which books he researched his work from—he noted them.

I said I was torn by this book and I will now try and explain why. It is a long volume and, in some respects, it isn’t a vampire book as the vampires are rarely in it and the main one we meet does nothing vampiric (bar time travelling through the fourth dimension to be able to witness events—a whole new vampiric skill I think).

In truth it is an origin story but Davies takes a convoluted route to the origin event, through the late fourteenth and fifteenth centuries. This is interspersed by the modern day story of a young woman, the car crash that placed her mother in a coma when she was a child and the breakdown of her familial support along with her college attendance.

The problem is the language. In the historical sections the author uses a modern idiom that simply acid strips any authenticity away from the scenarios. He even injects anachronistic concepts—a sandwich is mention just over 300 years before John Montagu (1718–1771), 4th Earl of Sandwich, was born. Yes, meat and vegetables may have been placed in bread in the time and place we are looking at but the use of the name sandwich is jarring but not as jarring as the mysterious early arrival of the potato to Eastern Europe!

Even when the action moved to modern times the dialogue was clunky, to say the least, and unnatural and the use of slang clumsy and inelegant. The fact that the vampire introduces himself as such to Kristi, a 21st century college sophomore, and she just accepts it without skipping a beat was way off base as a reaction. Indeed the characters as a whole did not feel at all real in their reactions and interactions.

The depth of background detail the book went into was certainly notable as its great length is fully determined by that and yet we were left with little background as to certain aspects that were more central to the book. We get little vampire lore. We discover that it is a demonic curse, that the vampires must kill daily and yet somehow the vampire we meet has beaten this but as we are told this in a throwaway line we don’t actually know how. The vampires must avoid sunlight and yet the vampire goes to a daytime college with no ill effect—the author does not deign to tell us why this is.

All that said, I actually found myself drawn into the book. The writing is amateurish, the language problematic and yet it didn’t stop me reading the book. It was not a struggle to return to it and there was no need to force myself to read it for the sake of the review.

This, I guess, is the larger part of the battle for an author and for this reviewer it makes life a little more difficult whilst trying to establish a score and a recommendation. I’ve settled on 5 out of 10 as fair, balancing the fact that it is entirely readable with the fact that the reading means encountering the poor prose, weak dialogue and the anachronisms.

Davies’ novel is also available through Amazon on Kindle. Visit his website for more information about the book: http://thefirstvampire.com/.

This is Andy’s first review as an official reviewer for Vamped. Previously, he guest reviewed Anne Rice’s “The Prince Lestat” and Lisa Dominique Machat’s “A Walk in the Sun.”