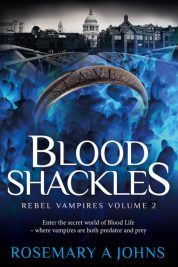 This is the second volume of the Rebel Vampires series by Johns and you might recall that I was rather taken by the first volume when I reviewed it. The primary reason was due to the focal character Light, a vampire (or Blood Lifer, as they are called in novel) who writes a journal for his dying mortal love, Kathy, who is suffering from senile dementia. It was the voice the author offered the character that carried the book for me.

That voice carries through into this volume as Light once more writes a journal—though this time it is a slave journal. As the book progresses we discover that between the end of volume one and the start of volume two Light travelled, ending up in the Far East and taking part in cage fighting he attracts attention, is captured and conditioned for a life of slavery.

A group of humans (or First Lifers) have discovered the existence of Blood Lifers and are capturing them, breaking them through torture techniques and making slaves of them for the very rich—primarily as sex toys, it would appear. Part of the conditioning is that they have their fangs ripped out—this prevents live feeding as the venom they inject (which paralyses their prey and causes the death to appear like a heart failure) is only produced when their fangs are fully grown (so when they are growing back they are still not able to produce venom). I found it interesting to see how reliant Johns had made the vampires become on their venom.

Light’s new mistress Grayce is the daughter of the head of the slavers and the journal is not only open to her but written to her, thus forming part of Light’s attempt (as he is not fully broken) to turn her to his cause – a let my people go plan, as it were. The previous review was entitled “No Ordinary Paranormal Romance” as the volume had a romance element—but it was perhaps more an elegy to a fading romance (due to old age and dementia). There was also much in the way of drama and thriller. That drama and thriller is there in volume two but perhaps the romance is a little more obvious as it is a new romance, it is plot necessary and, to be honest, it is the element you have to accept as the reader even if you felt that it was a tad more forced (given the circumstances). A criticism? Perhaps, but only a small one as, once more, it is the character and voice of Light that anchors the novel and carries the reader forward.

Previously I mentioned a hint of a Blood Lifer ruling body, that is clearer in this book though still not fully explored. What we do know is the ruling body seems to be made up of younger Blood Lifer and they are the ones who have sold out the older vampires, their potential rivals, to the First Lifers. Things will, I am sure, come to a head in the next volume with regards this thread.

So again, a strong book because of a strong voice. I liked the playing with the genre and making the vampires vulnerable (if still dangerous, deep down) and the cynicism about First Lifer morality. As Johns has said, “There’s no darkness in Blood Life that humanity didn’t invent first.” 8 out of 10.

Blood Shackles is available on Amazon in paperback and Kindle formats. The third volume of the Rebel Vampire series, Blood Renegades, will be released in June.

In the meantime, you can visit the author’s website: https://rosemaryajohns.com/.