Wow. Three years old, already. How far we’ve come! From our humble beginnings as vampirologist.com to the online magazine it is today, it’s been one helluva journey.

To mark the occasion—a doubly special one, because this is our 200th post!—I thought I’d share a few highlights from our history. It’s by no means a comprehensive list, as there have been so many highlights working as the site’s editor-in-chief.

Seeing Vamped in Print. Sort Of. 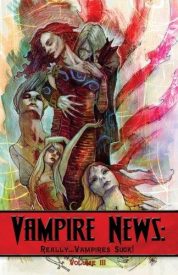 Although technically publshed before Vamped became Vamped, I was given a taste of my website’s ability to transcend its electronic shackles early on.

Stavros Cockrell, an editor at independent publishing company, Crazy Duck Press, requested permission to include Paula-Maree Cavenett’s article about being a “vampyre” for publication in the third edition of his annual anthology, Vampire News. The article was published largely intact, save for some minor formatting changes. It was a very proud moment.

As great as it is to be able to run a website, there’s nothing like seeing something from it in print. It just feels more…legit. In fact, I had an original article published in the same edition. The other article I contributed, but didn’t see publication in the volume (it apparently got lost in the shuffle of putting the book together), was a piece I wrote called “From Vampirologist to Vamped: Why the Change?” which explained why I decided to make the switch, also elaborated in a blog post elsewhere.

Like any child forming their own identity, Vamped has been through a lot of changes. But it wasn’t until Erin pitched her idea for an article about a Chinese vampire café, that I could really see Vamped‘s true potential. Although Erin already covered this part of our history in Vamped‘s 100th post, I really can’t stress just how important that article was for the site.

In July 2014, the Internet was abuzz with a story about a vampire-themed café in China selling drinks to its patrons in “blood bags” (actually red coloured drinks like red wine, cherry cola, and blackcurrant juice). Erin shared an article about it with me, but noted details about the café were very sparse; many not even mentioning the name of the café in question (it was Vampire Coffee, in case you were wondering). So, she decided to do some digging.

At that time, I was in a bit of a haze with the site. I knew that in order for it to survive, I needed external contributors (I can only write so much on my own!)—and the most logical contributors would be writers I frequently encountered promoting things on the various Facebook groups I am either a member of, or administrate. That’s why I put the call-out long before Vamped became Vamped: “Have you got a vampire-related book or film to promote? A project? Website, blog? Why not write about it here?” I thought that was enough of a hook to lure them in.

But even after the change-over to Vamped, the site sort of floundered about—not to say there wasn’t any good content being published at that time, I just wasn’t getting a good amount of pitches for stories I preferred to hear about or read. After all, there’s only so much self-promotional spiel you can hear about someone’s novel or film before, with myriad plot variations before it gets really dull. To keep them interesting, an angle or hook is vital. But that, of course, isn’t their fault—like I said earlier, Vamped was still determining its own path.

That’s why when Erin decided to dig into that café story, she inadvertently opened the door to an angle I never considered: investigative journalism. I love investigative journalism. What’s the story behind the story? What details have others missed? Is there more to it than people know? But most importantly, what is the truth? It’s just like being a detective unraveling a mystery. Better yet, it ticked the most important box Vamped posts must fulfil: original, interesting content. And it had a hook. I would even say it was the biggest turning point in the site’s history.

Despite what I said about our preferrence for investigative journalism, that doesn’t mean we don’t enjoy entertainment stories (with our own twist on them, of course). We still write about movies, books, music and even smartphone apps. However, I never thought we’d reach the heights of interviewing big names like Juliet Landau; Drusilla from the Buffy the Vampire Slayer TV series.

As someone who used to record every episode of the show (on VHS!) in its first few seasons, that was a helluva coup. Ok, so we weren’t the only ones she got interviewed by. And sure, she was on the crowdfunding trail, seeking donations for her upcoming documentary, A Place Among the Undead, but still—it was an honour all the same. In fact, she not only agreed to be interviewed by us, she also agreed to taking questions from our fans, too.

We even came this close to interviewing Anne Rice. About a month before the release of Anne’s book, Prince Lestat (2014), Erin got in touch with the book’s publisher and was able to secure a pre-release copy for review (that honour went to Andy). She also tried getting an interview, but due to a communication error, did not receive a follow-reply until chasing one up again in January 2015. Erin was put it in touch with Anne’s assistant, who said Anne wasn’t feeling well, but invited us to send our interview questions anyway.

The very next day, Anne’s assistant shattered our hopes with some unfortunate news: “Anne is grateful to you for this interview opportunity. Unfortunately at this time she must decline your invitation. Her schedule is very full for the coming months.” So close.

I’d love to share the questions we asked, but I want to hold onto them for now. Who knows? Maybe Anne will answer them some day.

Special thanks to Marita Crandle for sharing our enthusiasm about our site and for her wonderful vlogs; Andy Boylan for agreeing to be our book review guy and for having such an incredible work ethic; Sufi Mohamed for kickstarting this site in the first place, seeing potential in it—even when I didn’t—and especially to Erin Chapman.

I’m not exaggerating when I say that if it wasn’t for Erin’s passion, dilligence, promotional duties, hard work, detective skills and persistance, this site probably wouldn’t exist. I’m not only honoured to have her as a colleague, but even more so as a best friend. She is the true lifeblood of this site; the good cop to my bad cop.

I would also like to thank our fans, interview subjects, the commentators (except for the spammy bastards!), our readers, people who contributed to our old forum, the members of our Facebook group and page, to all who share our work, and our friends and enemies—who still give us something to write about. Thank you, all. We will continue to serve you as best we can.

Expect another site redesign, a rewrite of our write for us page—expect more in general. We’ve got lots of great ideas lined up. Lots of posts to finish. Side projects up our sleeve. Vamped has, and will always be, striving to be something better. We’re always finding our feet. We don’t—and can’t—rest on our laurels. As long as we’re inspired, we’ll continue.

Thanks again for your support and for joining us on our birthday. Here’s to many more!

If you’re interested in purchasing a copy of Vampire News, vol. 3, Really…Vampires Suck! (n.p.: Crazy Duck Press, 2014), it is available to buy on Amazon in paperback.

If you’d like to contribute an article to the site, pitch your article idea to us via email. We’ll try to get back to you as soon as possible. If you want us to review your book, make sure you haven’t already had one published by Andy Boylan. We only publish and accept unique content.