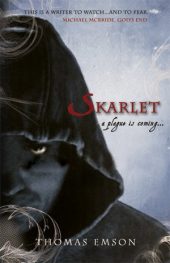 Q. When a pacey British thriller lands on your desk, what do you do?
A. Not work. That’s for sure.

I purchased this book second hand. Not because I preferred this method, but because I wanted to hold pages that had already been turned—to imagine I’d been sent a collection of pages out of the blue that I must read and discover the answers inside. Truthfully, maybe I did this with some inkling I wouldn’t enjoy the book. How wrong a person could be. Thomas Emson made me feel as though the stains left by previous owners (UsedVeryGood) were still spreading across the pages; the book came to life.

Five parts, 109 chapters—or, should I say, action-packed scenes—lure the reader into the darker side of central London, a shade of the city all of us want to experience and explore, but from our favourite arm chair; able to close the book when things get a little tense, which of course they do because this is Emson at his best. He takes the reader on a trip of a lifetime, gets them as close to the action as possible without physically involving them. The pace is ferocious, as if Emson lights the top of his writing pad with a Zippo before racing to the bottom spilling ink as he goes. Thank the vampire gods he writes on his computer for all to see. As Emson wrote in his guide to writing: “I am not boasting and I am not best-selling, but I know what I am talking about.”

Skarlet begins with the back-story of a brother and sister pair who, in years to come, rein terror across England’s capital. One of the many storylines running throughout the book sees the reader whisked into the life of disgraced ex-soldier, Jake Lawton; expelled from the Army for the reactions caused by a leaked wartime video. To top it off he’s been framed again for the distribution of a new drug: Skarlet. It’s almost a stroke of luck that people begin to turn into vampires after taking the drug; surely Lawton couldn’t be the mastermind behind the plague?

As Emson pays homage to vampire history—old (Dracula) and more recent (Highgate)—the reader follows the story of a journalist and the methods she uses to help uncover the source of Skarlet. We are dipped into the mythology of Alexander the Great and the 1920 Iraqi Revolt before we settle down in London for the main action. Lawton’s team, consisting of the reporter who framed him and the drug dealer who initially sold the pills, get help from a few more friends before heading to their final battle in a bid to stop the vampire demons rising.

Certain events during the vampire epidemic mirror Lawton’s time in the Army. For example, in Iraq he’s surrounded by the death of innocent people, and back in London he’s made to witness his ex-girlfriend die and return from the dead. A compelling read that might be an extended metaphor for post-traumatic stress disorder (PTSD).

Published in 2009 yet still relevant today, our drug-induced society, power-hungry politicians and terrorist groups could learn a lot from this novel. Emson has chosen a set of themes that stand the test of time: addiction; parenthood; national pride – just a few that continue to resonate with past and future audiences. Emson gets his point across thoroughly. He tells the reader what they want to hear about how a strong-minded group of people would act when the apocalypse comes—how they like to think themselves would act if this were ever to occur. I hope the author hasn’t predicted the plague he’s described so well.

I enjoyed the iconic, well-known British locations present throughout. Anyone who’s watched The News can envisage the main setting. Some may even recognize the similarity between characters’ names with those in Dads Army, now a classic British TV sitcom, or was that just me? Carry on, Wilson…

Commended for works such as The Trees and Other Stories (2015), Maneater (2008) and Zombie Britannica (2010), horror can be found in almost all of Emson’s work. But what he brings that is different to this backstreet, full-of-bravado corner of the genre, is unprecedented fear—what if this was to actually happen, today? Don’t worry, reader. You don’t have to wonder anymore, just read the book.

Words cannot express how good this book can be, so I’ve called upon mathematics to help me. For this tale of horrors is a remarkable equation of fear and spine-chillingness. Or in other words: Dracula + Doctors Wear Scarlet / Vampyrrhic = Skarlet.

Best read on the bus.

Skarlet is the first book in the Vampire Babylon trilogy (also called the Vampire Trinity). The second and third installments are Krimson (2010) and Kardinal (2012). Skarlet is available on Amazon in hardcover, paperback and Kindle formats.

You can visit Thomas’ website for further information about his books: http://thomasemson.com/.