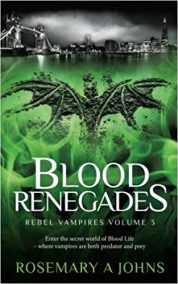 I have previously reviewed the first two books in the Rebel Vampires series, Blood Dragons (2016) and Blood Shackles (2016).

In the first book, primary protagonist and voice of the novel, Light, was a prisoner of circumstance–looking after his mortal lover who had, quite naturally, aged and developed dementia. The book was mostly him writing his and their story. The second book saw him literally in bondage, taken as a sex slave by a group of humans who knew about the vampires and were breaking them and selling them to financially privileged clients. In this his story was told in his slave journal.

So when this started and he was again a prisoner–this time of the vampire council–then I did slightly groan as we were very much in a pattern. But, actually, this works well as in each book the way Light has used his voice has been different and the prisoner device didn’t become stale. This time his story is given as a testimony to an inquisition as he stands accused of being the leader of a group of renegades and due to burn in 12 days after a trial (in what is clearly a kangaroo court). His story is detailed as the character boasts an eidetic memory.

Those who have read the first two volumes will know that this council is made up of younger vampires and it was they who worked with the human slavers in order that they might control the older, more powerful vampires and the more rebellious bloodlines. It is clear then that the council somehow usurped or assumed power and, if I had a complaint, it is that whilst we get to see enough to have an idea of the vampire society we do not get enough to paint it vividly. The fault with this lies with the narrator, perhaps, as Light does not seem to know much about that side of his society. This is not a mar when it comes to the book but indicates that Johns has scope, if she so wishes, to explore the wider Blood Life world.

As stands the book finishes the series off nicely, with regards Light’s story, and is a satisfying read and a good conclusion. 8.5 out of 10.

Blood Renegades, the last book in the first Rebel Vampires trilogy, is available on Amazon in paperback and Kindle formats.

Rosemary also shared the following exclusive (September 22, 2017): “there will be a second trilogy in the series” and a novella, set in the Rebel Vampires world, will be out on February 13, 2018, in her Counting Stars box set.

Visit the author’s website for more information about her work: https://rosemaryajohns.com/.