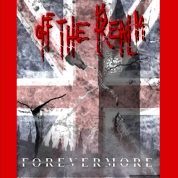 The crossing over of vampires and music is not uncommon. As well as various bands using vampire tropes in videos and lyrics, rock music became a staple trope within the media vampire genre. Sometimes this really works, and whilst hardcore Anne Rice fans may have baulked at the story changes within the Queen of the Damned film, the end product was a fantastic example of an MTV movie, which boasted a killer soundtrack featuring several notable metal artists of the time.

Jumping to the song Forevermore and we can say that it has been inspired by the Rosemary A Johns Rebel Vampires book series. At the time of writing this review I have written reviews of the first two volumes and have been rather impressed by them and the character Light, especially. The third book is now available, but I am afraid to say I was not impressed with this tribute to the books.

Released by Off the Realm, the brainchild of Tim Black, it is described as Goth Rock and London Punk, infused with Metal. In actuality, it is neither Goth Rock (one might argue Gothic Metal in places) nor Punk but style is almost an irrelevance, quality of the music is what matters.

We find ourselves in a Hard Rock landscape but the production is shallow I found the guitar distortion was heavily played upon and, given that Black is a bass player, I’d have thought there would be a deeper more resonant bass. I will say that there were some nice bass licks within the track, as one would expect, and would say they should have been showcased more within the arrangement.

Unfortunately, the vocals are thin and treated with effects that do not enhance, perhaps even distract. Lyrically there is a failure to scan satisfactorily and I didn’t find them either inspiring or haunting (the YouTube video linked for review was a lyric video). The song veers off into a more metal segment towards the end, with a pounding drumline that turns more to a thrash finale losing any mood as it does so.

Ultimately music is a very individualistic thing but Forevermore didn’t do it for me.

You can listen to Forevermore on YouTube and buy the single on Amazon, iTunes or Microsoft Groove. The single is slated to feature on an EP or LP also titled Forevermore next year.

Andy has now read all the books in Rosemary A Johns’ Rebel Vampires series. Read his reviews for the first book, second book and third book, right here on Vamped.