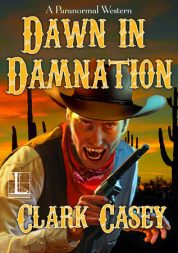 I like a mix up of the Western and Vampire genres (and indeed the horror genre generally). Whilst having only a casual interest in the Western genre as presented in its purest sense there is something intrinsically good about the genres merged.

That’s not to suggest that every example of the crossover works, indeed there are some Western/vampire films that are so terribly camp as to be painful (or at least unintentionally amusing) but when it is done right—and, whilst contemporarily set, I’ll cite Near Dark (1987) as a superb example—it can be nothing short of magnificent.

Dawn in Damnation is a novel (or possibly novella) named as a Paranormal Western. It is set in Damnation, a western town that serves a purgatory-like function. Common wisdom states that when you die (a second time) in Damnation your soul goes to Hell. Common wisdom also suggests that if you can go 12 months without shooting someone you’ll get a reprieve and go to heaven.

The town’s life centres around the saloon with almost damned cowboys and bandits drinking and gambling in a town that is forever in dusk. The eternal time frame works for Nigel, the town’s vampire who spends his time drinking gin as the dead’s cold blood is no good for him. A second saloon holds a pack of werewolves and the Native Americans live separate to everyone else.

Tom, the book’s narrator, writes a one sheet newsletter, The Crapper, notifying folks of the comings and goings in the town. There is a very low female presence—and women who arrive find themselves at the mercy of the dead—that is until Ms. Parker arrives. Wearing a wedding dress after killing herself on her wedding day, it soon becomes clear that she is pregnant and the baby is alive—tweaking the interest of both Nigel and the werewolves, given it is warm blood.

So, what of Nigel? Well, the vampires are a separate species. They can interbreed with humans and a child of that union will, if it drinks blood, have a one-in-a-thousand chance of turning. The sunlight trope holds true but, whilst hardy, a vampire can be killed with a bullet—if you can hit it.

I really did enjoy this. The setting worked, the internal rules held and Tom was a decent voice to narrate with. It reminded me a tad of the Bourbon Kid series (by anonymous) in the fact that it has mostly irredeemable characters, quick to draw and quick to kill, but the author knows what he is doing with the genre and what could have become repetitive is fun.

The only complaint, perhaps, is that I was hoping for more of a reveal at the finale – but there is at least one further volume planned (the book has teaser chapters from this at the end). 7.5 out of 10.

Dawn in Damnation is available in paperback and Kindle formats on Amazon.

For more information on the book and the author, visit http://www.dawnindamnation.com/ and http://clarkcasey.com/, respectively.

The second book in the Damnation series, Dead Indian Wars, was published on May 29, 2018.