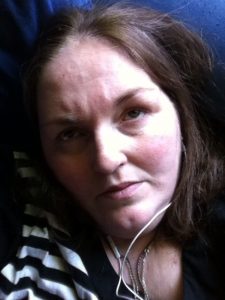 I am a housewife and a retired IT consultant. Prior to my work in IT, I was an academic researcher and staff member at Monash University. I have two degrees (one of which I graduated with first class honours) and a Grad Dip. in Research Methods. I began a PhD in 2000 but chose to defer my candidacy after a year.

My journey as a Vampyre started in the early 1960s as a child. I will not say that I was born a Vampyre, but I will say that I was acculturated to the notion of Vampyrism through family, heritage, imagination, life-experience, popular culture and through a morbid fascination for all things bloody.

My grandfather came over to Australia in the 1920s from a region in Romania known now as Cluj Napoca. Many will be more familiar with the city of Cluj Napoca as part of the region of Ardeal, formerly known as Transylvania. The region is known for its stunning scenery, its bloody warlords and its hordes of legendary Vampires (“Travel Advisory” 1993; Gerard 1888, 31–79). At the time of my grandfather’s youth, Transylvania was part of the Austro-Hungarian empire (Editors of Encyclopaedia Britannica 2008). It was not until the early 1920s that Transylvania changed hands and became a part of the Republic of Romania and hence the area was renamed (Történelmi világatlasz 1998, 2).

My grandfather used to tell me stories about the Vampyres of Transylvania. There were so many legends and folk stories around the villages about different types of Vampyres and witches, ghosts and other supernatural elements common to the deeply superstitious people of Romania (Murgoci 1926). My grandfather, himself, believed he was a Vampyre because of the legends about the tribes our family descended from.

The Carpathian Mountains were home to many divergent groups of people – these included the Dacians (Mallory and Adams 1997, 11), Vlachs who were Romans sent to populate the area and build a second Rome in 108 A. D., the Huns, Saxons and others (Mallory and Adams 1997, 11). Our family were Hungarian-Romanian which meant we were descended from a tribe known as the Scythians (Sinor 1990, 97-104).

Scythians were a feared people as they were barbarians, known for being brutal warriors and good horsemen (Sinor 1990, 97-194). They were rarely seen away from their horses and consequently superstitions emerged throughout Europe that they were half-man and half-horse (were-horses). Also they were feared because of their practise of tapping the veins of their horses so that they could drink the blood (Durant 1935, 287). This practise was used to stave off both malnutrition and thirst during their long rides (Herodotus 1909, Bk. IV). Another bloodthirsty aspect of the Scythian was that they would also drink the blood of their fallen enemies in battle (Durant 1935, 287). It was seen as paying homage to the fallen warrior and a means by which their power could be ingested (Durant 1935, 287).

People often ask if we are related to the famed Vlad “Dracula” III, Viovode of Walachia. I can honestly say I am not. The alignment of Vlad with vampires is an insulting prospect to a Romanian. He was a great leader who served as Voivode three times and was part of one of the longest ruling dynasties in Walachia. His dynasty ruled for three generations which was quite an achievement due to the politicking of the royal houses at the time. The nickname “Țepeș” is an insult tacked onto his name posthumously. It referred to a style of execution that was common amongst warlords of the day (“Vlad the Impaler” 2014) – a style much preferred by Vlad.

Vlad, although cursed by the Romanian Orthodox Church, was no Vampyre. To believe he was a Vampyre is ludicrous. The same applies to his cousin, Countess Elizabeth Báthory de Ecsed. Rather he is considered to be a hero because he quashed the advances of the Ottoman Empire (Beccia n.d.). On the subject of lineage, one can only claim such lineage if one is related to all the royal families of Europe and if you share the very rare genetic blood profile of the House of Basarab (Oliver 2012; Rhesus Negative 2014).

To cut a long story short, I developed a keen fascination for Vampyres and blood at a very young age. To me the smell, taste, sight and feel of blood is divine and very powerful. I will clarify here however, I am not a blood fetishist. To me the notion of a fetish is tied to the notion of sexual arousal.¹ I do not get any form of sexual arousal from drinking live human blood.

Whilst the Romanian folklore identifies over seven different type of Vampire (Murgoci 1926), I do not believe in the modern-day distinctions made between the differing quasi-Vampyre species (for want of a better term). To me, the Vampyre is a blood drinker who is capable of energy manipulation and shape-shifting. The shape-shifting element being a part of the process of lucid dreaming/astral walking/astral travel. That is to say, by my own definition, the Vampyre does it all!

The psychic or energy Vampyre, to my way of thinking, is more akin to the Incubus/Succubus myth where the energy feeder drains away the life-force or Prana/Chi energies from the victim. The notion of fangs and costumery becomes a redundant and somewhat theatrical feature of Vampyrism as it’s portrayed today.

So Why Do I Identify as a Vampyre?

I do not believe that drinking blood alone makes one a Vampyre. It’s more than that. To me, the Vampyre is also a powerful witch and practitioner of blood magic (Seth 2003, 1–10). The process of blood drinking imbues the individual practitioner with an overall sense of physical and mental wellbeing. Ritual using living blood is a very potent experience. It is somewhat akin to the practises of Voodoo, where blood and tissue are used as representative artefacts in making poppets, curses and charms.

I find the partaking of living (still warm) human blood to be a powerful life-giving experience. If I do not feed I become irritable, tired, depressed and lethargic. Before inviting me to write this post, Anthony Hogg suggested to me via Facebook chat that my thirst for blood was like an addiction and abstinence sounded similar to withdrawal. This is a pretty accurate analogy in my opinion – add this to the fact that I get a little buzz from the taste, feel and smell of blood, and you have got yourself a full blown blood junkie.

Call this what you may but to me this is part of what makes me a Vampyre. For whatever reason, be it iron deficiency, psychosomatic condition, genetic affliction, addiction or something that empowers a broken psyche, it is something that I need to do.

There are a lot of layers to Vampyrism for me, aside from the physical blood drinking element. Identifying myself as a Vampyre can be seen to be an attempt to gain control and empowerment where there has been none previously. It is also a way to identify personally with one of the most terrifying, yet alluring, apex predators in mythology. By taking on the mantle of the Vampyre I am satisfying my most primal urge to hunt, feed and protect myself physically, mentally and spiritually.

Being a Vampyre provides the opportunity to gain some balance over external locus thinking. For me, where once I was weak, broken and torn, now through the visage of the Vampyre, I become powerful, dominant and the master of my own destiny – an apex predator in my own right, capable of defeating my enemies and overcoming my frailties. I also gain some form of personal validation.

Sitting back and watching the conversations in the Vampyre Community News group on Facebook, I see many of the active participants suffering with some form of psychological, physical or social hindrance. From my stand-point, individuals will identify with the Vampyre culture as I have, for a sense of self-validation. Does this make sense?

Another aspect of identifying as a Vampyre for me was identifying with my own heritage – “smelling the blood of my blood”, so to speak. My grandfather spent seven years in a prisoner of war camp when he arrived here, because the government believed him to be a Nazi sympathiser. This was no picnic for him.²

He was forced to abandon his cultural heritage. He feared we would fall prey to the same thinking by the government, so he forbade us from learning elements of our history and our culture. Anglicised names and religious views were foisted upon us. We were forbidden from learning the Romanian and Hungarian languages (although I am rectifying this now). We were forced to assimilate. I am the only remaining family member that identifies with our family heritage and culture! To embrace my Vampyrism is in itself an attempt to embrace my own cultural heritage!

To this day, the belief in Vampyrism in the Romanian culture is just as strong and as unrelenting as it was a thousand years ago. In the villages they still dig up suspected vampires, behead them, burn their hearts, nail their feet to the ground, stake them and put rocks in their mouths to ensure the dead do not return to kill off the rest if the village. This is part of my culture and I own every last deliciously superstitious drop of it! I am a Carpathian Vampyre living large and proud in the tradition of my forefathers before me.

Aside from the psychological and socio-cultural elements, there is magic. I was a practising Satanist for many years. Blood magic in many forms was part of the Satanic culture from the unholy acts of desecrating the sacraments during Black Mass to the utilisation of blood in ritual magic (Rhodes 1954, 12). In addition, there was the use of energy work for all sorts of reasons. On top of this the Vampyre, as part of my Satanic experience, was used as a kind of demonic enforcer (Cavendish 1967, 229–322).

We would call Vampyric revenants to aid in the recovery of “lost souls” and to seek out and the destruction of our enemies. We would use blood to seal covenants, invoke demons, empower sigils and call down curses and cures alike. Blood magic and Vampyrism within this context was intoxicating.

As a side-note, I no longer identify as a Satanist because of divisions and waywardness in the community. Having said this, the fundamentals of magic apply just as much in Vampyrism as far as I’m concerned.

My Take on the Vampyre Community

In conclusion, I want to say that these are my own very candid thoughts and ideas! I am aware that my notions on what constitutes Vampyrism will vary greatly to those out there in the community. Like the Satanic community, there is much divergence in opinion. It is intimidating from the perspective of an outsider looking in.

For me, as an individual, Vampyrism is about the psychological need for validation, blood addiction, power through magic, control, balance and ancestral history. On the opposing side, it is not about dressing up, fetishism, theatrics or role-play for me. My prevailing thoughts in closing are that the blood IS the life!

1. A form of sexual desire in which gratification is linked to an abnormal degree to a particular
object, item of clothing, part of the body, etc.

² He was a prisoner in the Graythorne Prisoner of War Internment Camp in QLD, he was later moved to Loveday in NSW and for a time he was in Tatura in VIC.