I was scrolling through my twitter feed as I do each morning getting the word of the day when I couldn’t believe what the Province Newspaper had tweeted! I held my breath as I clicked on the link and skimmed the article frantically searching for the event details, hoping tickets were still available. The article said the grand dame of Gothic horror would be in West Vancouver for one night only at the Kay Meek Theater in my neck of the woods.

To say this woman was a major influence in my late teenage years would be an understatement. My fascination with vampires began when I was about eight years old after I picked up a copy of a children’s book called Bunnicula written by James Howe and published in 1979. For those of you that haven’t read this one, it’s about a family with a vampire bunny as a pet. Later when I was in high school I randomly picked up a copy of The Vampire Lestat and immediately fell in love with her characters, New Orleans, and the entire ambiance of the vampire world she so brilliantly portrayed. The obvious next move for me was to sign up for the Anne Rice fan club. I remember getting posters and newsletters in the mail, which soon decorated my bedroom walls. My mother never said much about my new obsession, I guess it was the black nail polish and lipstick I used to wear to school that desensitized her.

I found the site and immediately clicked on the link to buy tickets, which led to total frustration. It was one of those bloody sites you had to register and create an account in order to make purchase. Needless to say about ten minutes later, I had my ticket.

When I entered the Kay Meek Center on November 7 the atmosphere oozed with the usual West Vancouver vibe and only a local would understand this reference. I scanned the crowd and was surprised to see a mostly female dominated group of older people dressed to the nines with glasses of wine in one hand and their books in the other.

There was as large table set up with a rude impatient woman selling copies of Anne’s new release she was promoting that night, The Wolves of Midwinter. This is the second book in her new series The Wolf Book Chronicles. They were also selling copies of The Wolf Gift and Interview With The Vampire. I had brought my personal copy of Interview with the Vampire with me in hopes of getting it signed, but wasn’t sure what to expect. It was my first time going to one of these things, and I had no idea if there would be just a presentation or meet and greet. I purchased a copy of The Wolf Gift and watched in silence as the same rude sales woman accused a man beside me of stealing a copy from the table.

I heard the usher open the doors and call for us to take our seats so I funneled through with the crowd. On my way in I noticed a small table with a question basket brimming with folded up pieces of paper for the guest of honor. I found my seat decently located towards the middle of the theater. The first thing I did was brag to my 3240 Twitter followers: 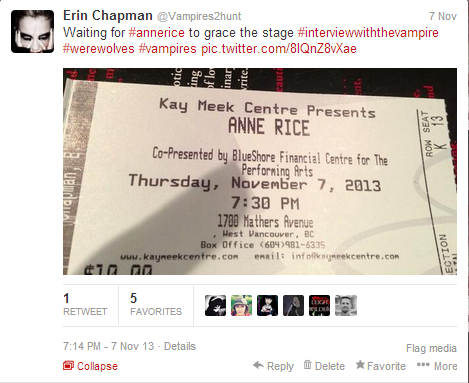 When the woman of the night graced the stage she was accompanied by a theater instructor from Capilano University located in North Vancouver. The crowd instantly rose and applauded until the two women on stage took their seats. The interviewer scanned the crowd and announced since the seats didn’t sell out we had the opportunity to move closer and get cozy with one another. I eagerly looked around and no one was moving, so I got up and made a bee line for front row, which was completely empty. At this point some people had shifted, but avoided the front row. I stood contemplating if I should go for it, when a young man asked me, “Is this row off limits, why is it empty?” I shrugged and said, “I am game if you are?” We sat down and I snapped a few quick pics for posterity on my iPhone, not wanting to look like a star stuck crazy person. 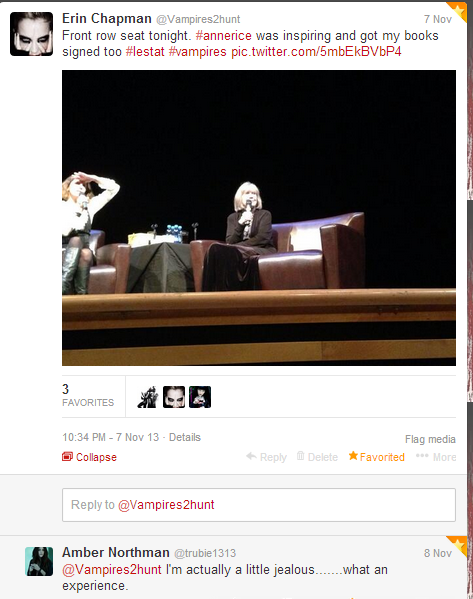 Anne Rice seemed very relaxed and at home on the stage, despite fidgeting with a tissue the entire time. The interviewer was like a giddy school girl. Her eyes sparkled permanently grinning and her nervous hands clutched a wrinkled piece of paper containing her questions. They discussed her new book and series delving into the character of Reuben explaining how he is totally opposite in comparison to her family of vampires. Anne voiced her familiar opinions in regards to the movie Interview with the Vampire explaining how she was quite proud of the film adaptation. When asked about the movie Queen of the Damned her response was less favorable. If you are a devoted Anne Rice fan you will know she was thoroughly disappointed with the film and generally refuses to discuss it.

The most memorable question for me that night was when Anne explained the entire Vampire Chronicles was created on a whim. She hadn’t planned any of it and just started with an obscure idea. What would happen if you interviewed a vampire? How would he speak, what stories would he tell, how many lifetimes had he lived, how would he dress and did his personality have any human characteristics left? After much consideration and planning, Lestat and Louis were born. This story hit home for me because I started writing on a whim and never thought I would end with an entire novel on my hands. Hell I was originally aiming for a short story at the most.

The interviewer proceeded to the question answer segment, holding the basket I had seen about a half hour earlier. She read about ten questions and let Anne answer them before turning to the crowd, asking if there were any more questions since they had a few minutes to spare. The majority of the questions revolved around her erotica series, which was something I have never picked up or read. About 830pm they concluded the interview with a standing ovation and announced Anne would be in the foyer available for autographs.

I poured out of the theater as quickly as possible anticipating the lengthy lineup and I was correct. I ended up standing in line for almost an hour. I found this picture on the Anne Rice Facebook group and was surprised to see myself in the line. I am just to the left of the woman in the red coat, so this gives you an idea of how long the line was since it took me about 45 minutes to get this far. 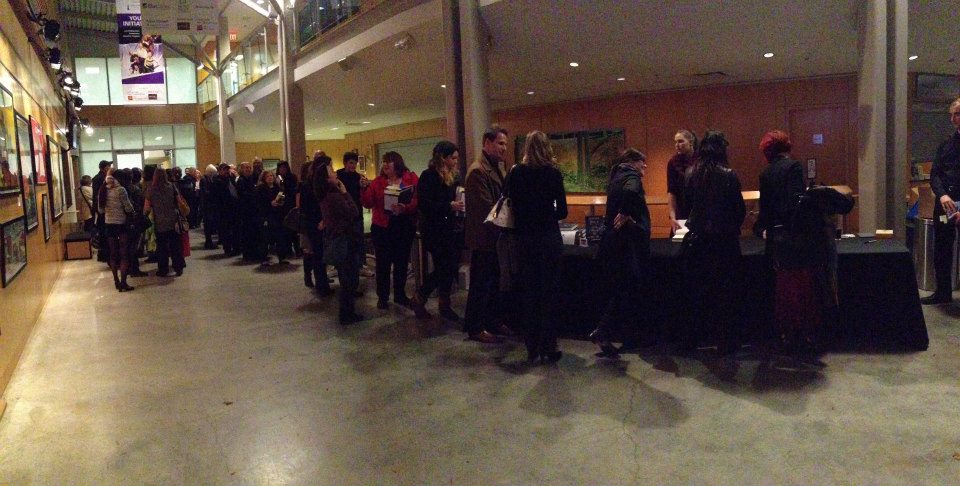 As I approached the table one of the crew members asked me how many books I had to sign and proceeded to tag the pages with post it notes. When I finally reached the table the final person ahead of me was an older gentleman with an entire duffle bag overflowing with books to be signed. I watched impatiently as Anne signed every book. 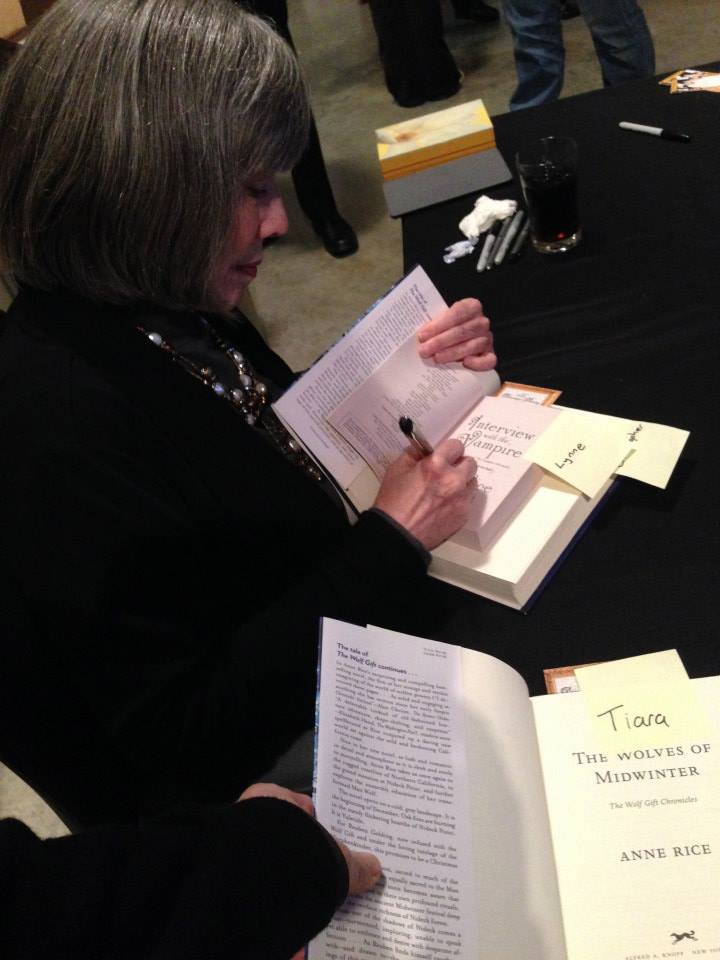 I handed her my books and she smiled. I briefly explained how she had inspired me to write my own novel, which I had just finished the week before. She congratulated me, wished me luck with publishing it and said to just be persistent because that was the key. I thanked her and walked away gripping my books tightly grinning from ear to ear. 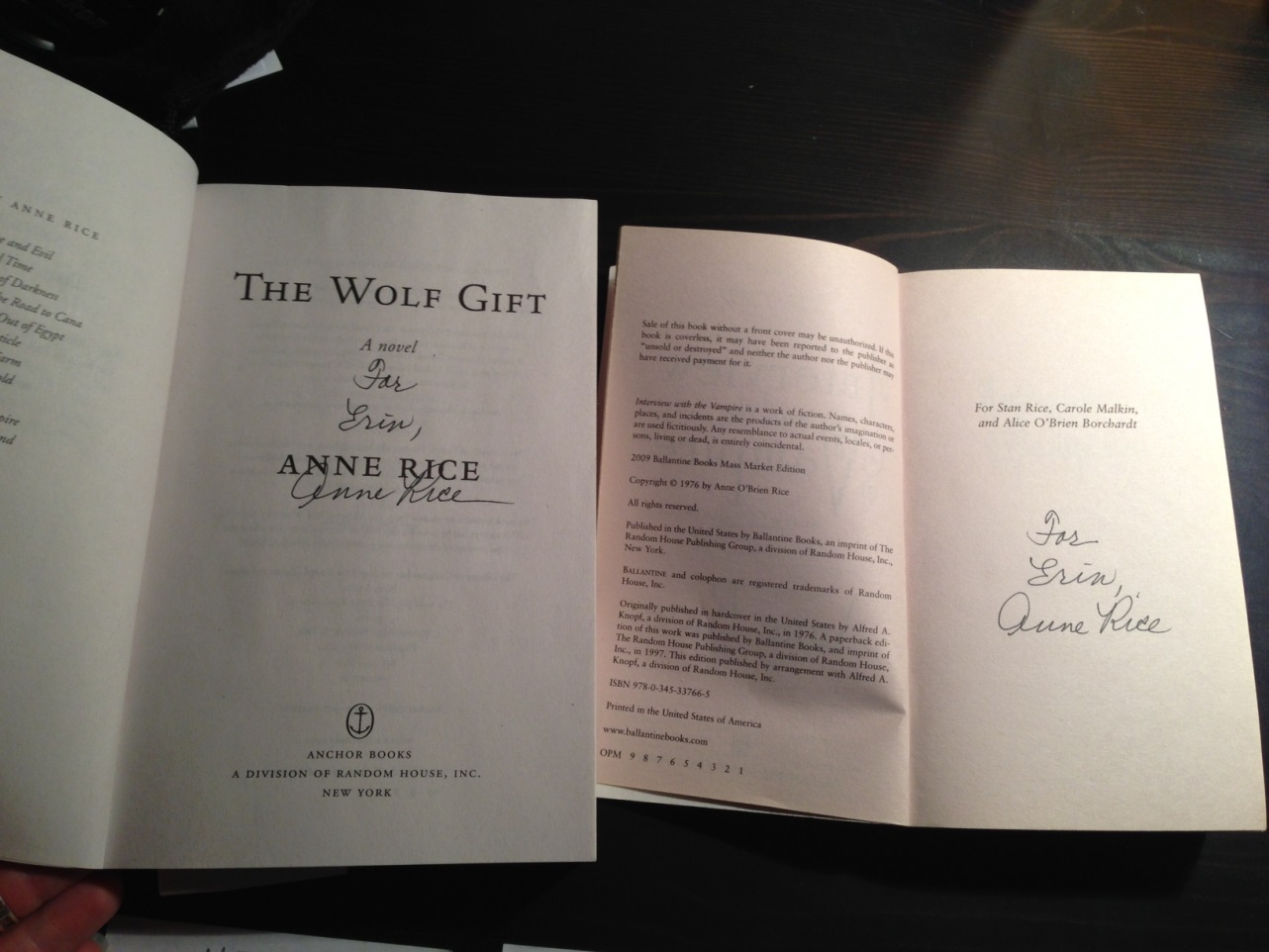