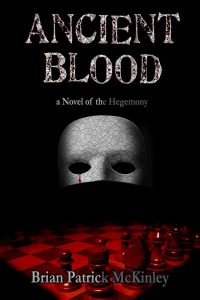 In my novel, Ancient Blood: A Novel of the Hegemony, The Hegemony (often just referred to as The Order) is the society of vampires that secretly “controls the world.” I put that in quotes because, as I researched further and further, I became more convinced that genuine control of human civilization is a fallacy.

Aristocracy or extreme influence over the most powerful institutions of our world, however, has been proven to be entirely possible. This idea isn’t new, but I thought that using undying, unchanging vampires to represent the way archaic ideas and institutions continue to wield obscene influence in our world even today worked particularly well.

I always wanted my vampires to be symbols as well as characters. They allowed me to comment on aspects of the vampire condition in my world as well as satirizing the powerful in general. Such grand figures living on so large a scale can’t help but represent something about the human condition to me. Being a fan of vampire folklore and fiction stretching back to Stoker and Byron, I also felt that my cast of Hegemons (Greek for “leader”) was a way for me to pay an affectionate tribute to the various vampire archetypes that influenced popular culture over the years. This was one of my first ideas and one of the few themes that survived the various incarnations of the story.

Like most of us, I grew up believing that Bela Lugosi’s Count Dracula represented the original vampire of myth and legend. It was only later as I read more novels, more folklore, and more serious scholarship that I discovered how wrong we all were! My eyes were opened to new worlds, new beliefs, and strange new creatures. I wanted to use all of them! In the next article, I’ll explain how I managed to incorporate these legends into my world’s history, but for now let me introduce you to the major players in my drama and what archetype they represent.

My protagonists are Avery Doyle and Caroline Ludlow, both of whom represent what might be considered the modern vampire trope: the Heroic Vampire. Both are idealistic and became vampires consensually and with a full understanding of what it meant.

Both were, to different extent, exposed to vampires by Hollywood prior to encountering the real thing. Both are humane and regard vampirism as a condition that offers benefits and has negatives that can be “worked around.” Avery, in particular, is extremely aware of vampire pop-culture and uses a great deal of referential humor, a carry-over from characters like Charley Brewster in the original Fright Night and the kids of Scream. He is my answer to the question, “Why doesn’t anyone in a vampire story ever seem to know anything about vampires?”

In Caroline, I explored traditional Paranormal Romance territory, however I subverted convention by making Caroline the dominant partner in her romantic relationship with Avery. I do pay homage to the traditional roles by telling her love story with her Creator, Sebastian, through journal entries.

Sebastian Blackwood, the Hegemon of North America and primary antagonist of the novel, inhabits the archetype of the Savage Vampire: animalistic, predatory, wild, and bloodthirsty. This type of vampire is also relatively modern in popular culture despite having a long folkloric tradition and came about as a backlash to the elegant, Tragic Vampires of novelist Anne Rice. Because of this, I gave Sebastian a history in which he had been the most humane and enlightened vampire on the council prior to contracting a disease called Feralism. Therefore, he also fulfills another common trope: the Hero Turned Villain. Sebastian chafes at all restraint and is ruled by his passions and animal instincts more than any other character and what former humanity he possessed has now been lost.

The true monster of my book is, in fact, Jean-Paul Valmont, the Hegemon of Africa. French, foppish, and witty, Valmont has all the appearance of Rice’s Tragic Vampires, but is actually the Satanic Vampire. Valmont is truly evil and revels in his role as such, a tribute to some of the older vampire stories such as The Vampyre’s Lord Ruthven: he is the predatory rapist, the gleeful sadist, the fiendish corrupter, and the force of pure malevolence that characterize so many of the vampires of world folklore and literary tradition. His appearance and manner are meant to evoke both Ruthven and Rice’s Lestat as he first appeared in Interview with the Vampire.

His Creator, Julia Agrippina, is the classic Vampiric Mother, found in mythical vampires from around the world. The mother of Nero in life who was murdered by order of her own child, she is a devourer of children, a practitioner of witchcraft, and the maker of creatures like Valmont.

Many of the vampires of folklore are female, particularly women who died in child-birth and become a concept of motherhood reversed. She is Lilith, Lamia, Strega/Strix, and Elizabeth Bathory: elegant, powerful, ancient, and aristocratic. She fulfils the role of the Historical Vampire, which is the more modern trope of taking figures from history and making them into vampires, though she is not the only one.

Julia’s companion in historical reality is Hegemon Geoffrey Plantagenet, who was Duke Geoffrey II of Brittany in history and now ruler of the United Kingdom in my world. However, being a Historical Vampire is about the only quality he shares with Julia and his primary purpose in my novel is to represent my Vampyrs; cold, manipulative, and purely political in nature, Geoffrey is the absolute epitome of The Order itself: the Vampire Sociopath.

In his quest to master the Vampyr game of world politics, he has eliminated or repressed every human quality that could potentially hinder him. Everything he says and every move he makes is calculated to advance his political agenda in some miniscule way. Even in this, however, he harkens back to the obsessive-compulsive nature sometimes ascribed to vampires in Asia and the Middle East.

An intellectual gamesman, his vampirism is societal rather than individual; he is the ultimate parasite, sucking in money, innovation, progress, and creativity to feed his insatiable appetite. Geoffrey is my contribution to the vampire cannon: the ultimate one-percenter.

So where are the Louis’s, the Bill Compton’s, the Angel’s? Don’t worry, I didn’t forget that important demographic. The head of my vampire council is Iago de Medici: the Tragic Vampire. Elegant, extremely articulate, brooding, and guilt-ridden, Iago is named for the villain of Shakespeare’s classic Othello, to signify his treacherous past. Once as ruthless and Machiavellian as Geoffrey, Iago has experienced an awakening of the heart and come to regret his previous behavior.

Inherent in so many modern vampire stories is the principle of redemption, that it is always possible for us to redeem our past behavior and change our direction. Vampires serve this function so well because they allow for an endless lifetime in which to reflect; their sins can be truly epic and allow for an eternal struggle. Iago embodies these ideas as he struggles to change not only himself but also the society of The Hegemony for the better.

However, no collection of vampire archetypes would be complete without the classics, so I have Draco: the Autocratic Vampire. Crafted largely by Bram Stoker, domination in all forms is this vampire’s modus operandi and so it’s ironically fitting that this creature was the first to truly dominate public consciousness and define the term vampire.

Draco is the classic vampire of Universal and Hammer fame; the ancient aristocrat in the crumbling castle upon the mountaintop. Everything and everyone around Draco is an obstacle to be overcome or an adversary to be subdued, for his is a world of masters and slaves. Traditional to a fault, there is nothing soft, pleasant, or humane about this kind of vampire. As a further nod to tradition, I put Draco in charge of Eastern Europe and Russia and allowed him to have Revenants to serve him like the mindless vampires of Slavic folklore. I think the name might be a bit of a tip-off.

Finally, I give you Jade Tiger, emissary of the Jiang-shi of China and Hegemon of Asia: the Succubus. Sexy, exotic, and mysterious, Jade Tiger is both of master of desire as well as its slave.

In keeping with Chinese tradition, the Jiang-shi see themselves as demons risen from their deaths to torment the living while being tormented, themselves. I wanted to keep some sense of the mysticism of the vampire, as well as represent the fact that the scientifically-based Vampyrs weren’t the only vampires in existence and the inclusion of the Jiang-shi was one way to do so.

By being different from the rest, Jade Tiger is able to demonstrate different traits, such as Psychic/Emotional Vampirism, day-walking, shape-shifting, and the religious concepts and taboos that gave rise to so many cultures’ vampires.

I have to admit that the Jiang-shi in my novel bear more resemblance to the Hungry Ghost of Chinese/Japanese folklore and anime popularity than strict folklore. However, because so much Chinese folklore is contradictory, I felt that I was still representing the spirit of the original legends in a way that suited my story. I added the Kuang-shi (different pronunciation of the same name) and gave them the feral, monstrous appearance and behavior of the other common type of folkloric creature.

While both terms essentially mean “stiff corpse,” I deliberately chose to avoid the hopping, anachronistic zombies that are popular in Japan because I just couldn’t take such a thing seriously. I hope you can forgive me.

Well, I think I’ve gone on long enough for this particular topic. I hope that this peek into my mind and the creation of Ancient Blood: A Novel of the Hegemony has been interesting and maybe even made you want to pick up a copy. Please share any thoughts about my article and this topic below!

Ancient Blood: A Novel of the Hegemony, is available through Amazon on Kindle and paperback. The book has its own Facebook page—over 1,000 likes and counting! Brian Patrick McKinley is also the founder of the Vampire Writers Support Group and can be reached through his website and Twitter.