I am not a vampire. There’s little about me that is particularly remarkable.

I’m a retired professional firefighter, now a writer, and a life-long fan of monsters, horror, and all things that go bump in the night. During my childhood, I was pen pals with Forrest J. “Uncle Forry” Ackerman, Famous Monsters of Filmland‘s editor.

I grew up loving vampires in film and fiction. How grand it was to face the most powerful, fearsome creatures in history from the safety of my chair. They outwitted their enemies or brushed them aside with otherworldly ease. They got the girl. But, in the nick of time, good triumphed over evil. And then, with the turn of a page, I could resurrect them all over again for another go.

I am a romantic. Ugh, please. What could be worse than a romantic horror fan? In this age of body counts and video games, who has time for dark brooding passions and Gothic mystery? Well, I do for one.

Give me terror that spans the ages over quick shocks any day (or night). Call me dull but, I re-read all of the classic horror novels every decade or so—I’m 52 now. I have read Frankenstein, The Strange Case of Dr. Jekyll and Mr. Hyde, Carmilla, the works of Poe, The Picture of Dorian Gray, etc., roughly four times each and I never tire of them.

In early 2010, it was Bram Stoker’s turn again. I would re-read Dracula. But this time, in an attempt to submerge myself in the tale, to heighten the mystery and suspense (the very elements that create romance), I decided to experience the novel as the characters would have done.

As everyone knows, the story of the vampire king is told chronologically through newspaper articles, and in dated letters between and the dated journal entries of characters in the book. I read the novel as if I were one of those characters, experiencing each piece of Stoker’s fearful dark puzzle (and only that piece)—on the day indicated.

Dracula begins with an entry in Jonathan Harker’s journal dated 3 May. That’s the day I started reading, and I read only that entry. While many may have experienced Dracula in this way, it was a first for me and it was delightful. My whole experience was Harker’s 3 May and—I was on that coach with him.

I followed that course throughout. I didn’t cheat or read ahead. That would have destroyed the mystery; the romance. The point was to share Mina’s excitement at Jonathan’s next letter, to follow Dr. Seward’s horrific revelations regarding his patient Renfield, to get my view of Stoker’s idealized reality, of Dracula, Van Helsing, and the rest, in their real time.

Some days, I read an entry in the morning, then returned for another that night. Sometimes I was forced to wait days for the next item. It was entirely up to Stoker and his characters. Thanks to technology and the postings of marvelous people on the Internet, I was able to not only read my dated snippets but also to visit the places about which the characters spoke – on the day they were speaking. It was a marvelous way to enjoy the classic vampire tale.

There are faster ways to read a novel, but that was hardly the point. The final entry is dated 6 November and that was the day I finished. (No, I did not wait seven years to read Harker’s final note. Even romantics have limits!) Reading Dracula this way was amazing and, if you’ve never done, I highly recommend it.

I told you that story to tell you this one…

Like all writers, I write when not reading, I read when not writing, and I’m always asking “What if…?”

Re-reading Dracula, I not only fell in love with Stoker’s classic all over again but I began to think about the novel’s happenings as a writer; wondering what happened in all of the moments before, between, and after those the author related. For me, chief among them was the brief but terrifying passage of the doomed Russian schooner Demeter and Count Dracula’s sea voyage from his homeland to Whitby, England in the bowels of that ship.

Stoker just teased us, didn’t he? Two scant pages of journal entries from an unnamed sea captain. A vanishing crew. A wrecked ship. That same captain, the only man left aboard, dead and lashed to the wheel. Reading the book as I did, there were days when I got only a cryptic journal entry of a few words and was left to hang and to wonder. “On 13 July passed Cape Matapan. Crew dissatisfied about something. Seemed scared, but would not speak out.” That’s it? Come on, Mr. Stoker, have a heart!

What could be scaring these tough men of the sea? I began studying sailing ships, plotting the schooner’s course, looking for hours at satellite imagery of Whitby harbor and her ruined Abbey. I was there. I was hooked. I was transported. And, of course, I was constantly wondering, “What if…?” 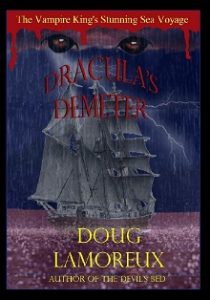 Finally, I felt compelled to write Dracula’s Demeter, a novel, my novel, about that fateful voyage in which I answered for myself all the questions I’d asked along the way. Temerity? Perhaps. Who in the hell did I think I was? Yeah; I have no idea. Just a writer I guess and a fan.

My goal(s), beyond sating my own curiosity, which I discovered along the way, ended up being: First, to write a good, atmospheric horror tale. Did I succeed?

Fangoria Magazine called my novel “…a fiendishly clever and welcome addition to the Dracula mythology.” Peter D. Schwotzer at Famous Monsters of Filmland said “… the mounting dread and terror felt by those on the ship is arresting… the sense of claustrophobia is very real and unnerving. As the crew slowly disappears one by one, the sense of hopelessness, despair and terror is tangible and at times very frightening.” He included it in his list of favorite reads of 2012. I was walking on horror geek air!

But, as pleased as I was, I knew these were the reactions of the horror crowd. What about academia? Stoker wrote classic literature that has survived the ages and never been out of print. That my work might accomplish the same was neither an expectation nor a remote dream, but I did find I had a second goal: to fill in the blanks in that one part of the vampire king’s story. Not to copy Stoker’s style or voice, but to tell my version of the events in a voice that was compatible with the original. Did I succeed?

I’m gratified to report some think so. Prof. Elizabeth Miller, one of the world’s foremost authorities on Stoker’s work and the President of the Canadian branch of the Transylvanian Society of Dracula, said the following in the society’s newsletter, The Borgo Post: “Lamoreux takes this scanty text and expands on it… He manages to do this without once violating the spirit of Stoker’s original rendering.” Like I said, gratifying.

More fun yet were her opening and closing comments, “I just loved reading this book,” and “Highly recommended!”

Had enough of me? Me too! If you haven’t revisited Dracula in a while, try it a new way. The next reading begins on 3 May. If you feel it, I invite you to add Dracula’s Demeter into the mix. It should, at least chronologically, fit nicely.

If you are a writer, ask “What if…?” often and dare to answer the question yourself. If you are Bram Stoker, I sincerely apologize for any offense given. And if, like me, you are a hopeless romantic, or worse, a romantic horror fan, you have all my sympathy.

Doug Lamoreux is a Horror Society Igor Award Recipient. Dracula’s Demeter was nominated for a 2012 Lord Ruthven Award. It is available through Amazon on Kindle and paperback. He doesn’t have a website, but has an Amazon author page which can be viewed here. You can also find him on Twitter.