Last year, while looking for a relevant picture to include in my September 22, 2013 blog post about the connection between vampires and sleep paralysis, I came across this impressive artwork in Google Images: 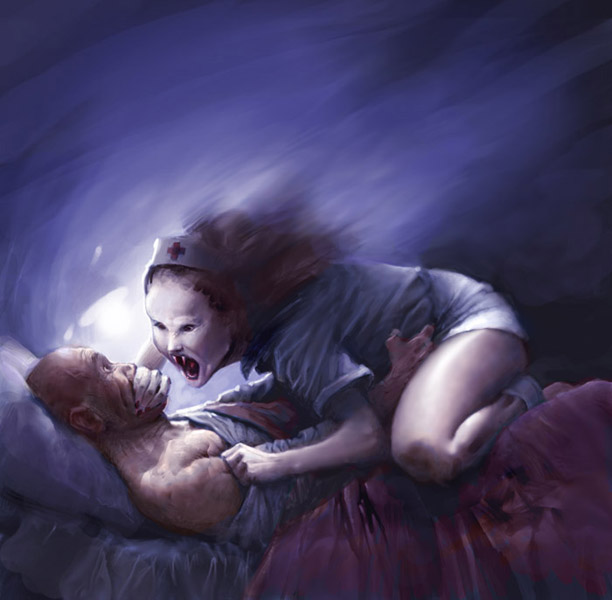 Unfortunately, the source—a University of Minnesota student’s blog—didn’t mention where they’d gotten the image from, the illustration’s name or who created it. I was left with a dead end, but included it in my post anyway. I credited the blog as the image source.

Nonetheless, I still wanted to know where the picture originally came from. Was it scanned from a book?—it looked like it could’ve been. The earliest result I could find on a Google search, yielded the student’s blog, but I suspected they hadn’t created it. Surely that would’ve been mentioned in there? The search continued.

On October 26, 2013, I opened up a forum thread on this website titled, “Who Can Tell Me Where This Picture Comes From?” and shared a link to it on the “Art of the Vampire” Facebook group on October 29, asking “Would anyone be able to help me out with this one?” I also posted a request for information on my Tumblr blog, for good measure. No one was able to provide any leads.

But the answer finally arrived on January 25, 2014—on the same forum thread I originally posted my request. Vamped member, Count Talavar, wrote:

From what I can find, the artist’s name is Steven Stahlberg, and it is called The Nightmare.

I followed his leads and found the image on the Fantasy Gallery website. Talavar had solved the mystery—though forum member, Paula-Maree Cavenett added:

I posted the source of that pic ages ago but for some reason the post did not show up.

I now had a reliable lead. The website even linked to Stahlberg’s website, Android Blues. I contacted him via the site’s comment’s section on the same day as Tavalar’s revelation. Stahlberg wrote back, offering his e-mail address.

I e-mailed him, mentioning, “I’m interested to know what it was for, when you painted it, why, etc. All that stuff.” He wrote back soon after, explaining the picture had been done “around 2001 or 02,” adding:

I originally just had the idea of how we put our trust in our caregivers, and how vulnerable we are when we do so, especially late at night (I used to work the night shift in a mental hospital).  Also, I thought about how perfect it would be for a vampire to work in a hospital.  I just did it for myself, on my own time, illustrators sometimes call it “self promotional”, but what they mean is, “just for fun”.  🙂

I responded to Stahlberg’s e-mail today and invited him to add me on Facebook, so we could chat about the picture. Within a few minutes, we were chatting about it. I asked him why he chose the vampire as his subject. He said,

Well, when I sit down to try to come up with a “cool” idea – something that I will think is cool, and something that I suspect others will too – vampires are just part of the vocabulary, like all the rest – zombies, aliens, cowboys, pirates, ninjas, etc.

I asked him if it’d appeared in a book; how did it get on the ‘net at all? It hadn’t featured in a book, but as to how it got online, he told me he’d posted it online, himself. Did he recall the site? “CGTalk.com I think.” How did he create it? It was “done in Photoshop. Wacom tablet and stylus. PC computer. Around 2001 I tihink [sic].”

He also mentioned there had been a follow-up to it—a “revamped” version in 2010. I wasn’t aware of that that, so I asked to see the new version. Here’s what he sent: 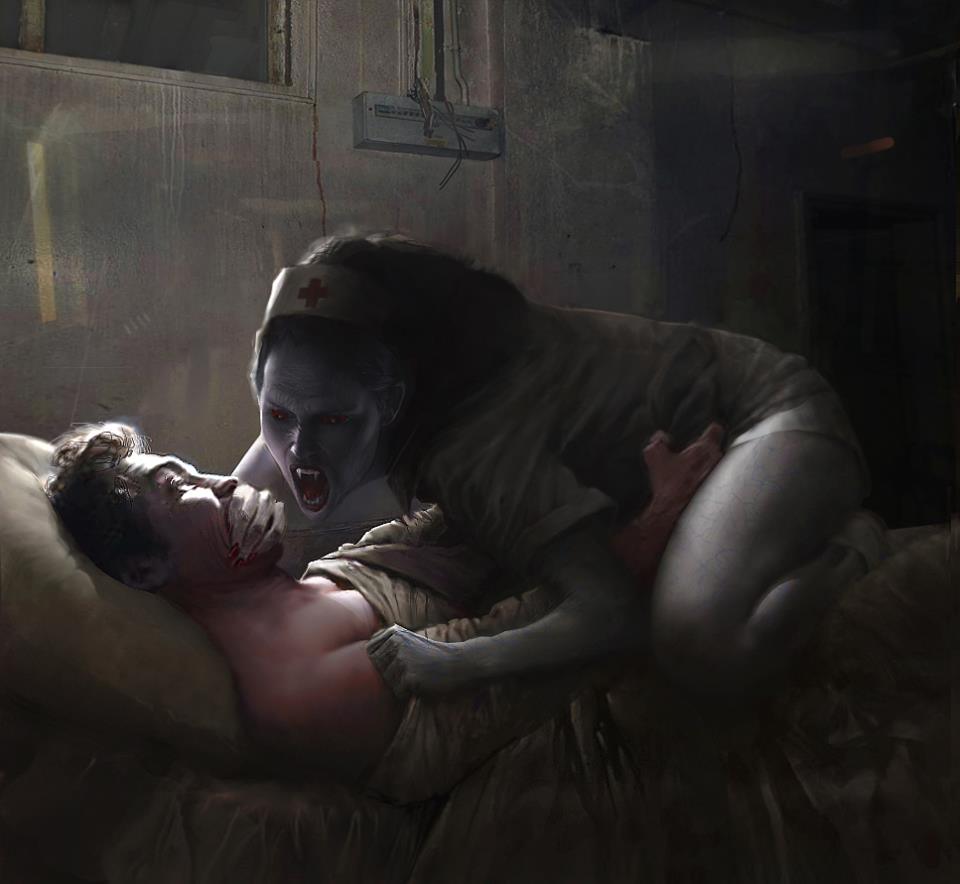 “The reason I did that is, by that time I had a job with CCP to work on [MMO] World of Darkness,” Stahlberg replied, adding, “Not anymore, but it was fun while it lasted.”

CCP didn’t go with Stahlberg’s image. “Concepts are a dime a dozen, they have dedicated concept artists that churn these out hundreds a week, very few ever get used.”

He was part of the company’s first wave of mass lay-offs in 2011. As of December 2013, the company’s been making more “strategic adjustments” to their World of Darkness project—15 staff members were laid off from its Atlanta office.

As far as I’m concerned, CCP’s loss is Vamped‘s gain. The picture, both versions, is brilliant, wonderfully evocative of the Nightmare; an up-to-date, vampiric twist on Henry Fuseli’s masterpiece—a connection Stahlberg wasn’t even aware of. I asked him whether he was inspired by versions of the work. “No, I don’t think so…”

What did Stahlberg think of his own picture? Was he proud of it? He told me,

I like the background in the second version. It turned out creepy, like that guy went to bed in his home, but wakes up in a different place, a run-down deserted place, there’s no one around. No sound, no response when he calls. Except, after a while, someone or some thing does turn up.

Steven Stahlberg is a freelance artist from Baltimore. His work can be viewed on the CG Society website. His own website, Android Blues, is a graphic novel in progress.