You might’ve noticed that Vamped looks a little different now. We’ve decided to scrap the design which saw our site featured on the MH Themes Magazine Showcase (“Formatting Changes, Showcases and Photo Captions—Oh My!” Oct. 4, 2014) and go for something that reflects our new direction.

We previously migrated from BuddyBoss to MH Themes’ Magazine layout (“Major Overhaul,” Sept. 2, 2014). Now, we’ve adopted MH Themes’ Newsdesk theme. What’s that got to do with our new direction?

As Erin said in her interview with Magenta Ash (“Behind the Curtain: Vamped’s Administrators Interviewed,” March 1, 2015), Vamped is a “general interest” vampire site—but we want to expand our coverage. Although we’re technically not a news site, we’ve incorporated many newsy elements. And there’ll be more to come. In the meantime, here’s the most significant changes you’ll see on Vamped:

Vamped’s had its Metal Mania font logo a long time—you can see it in the site’s BuddyBoss incarnation (“Major Overhaul,” Sept. 2, 2014). The title was actually a very oblique callback to the font Erin chose for a shirt she created for me, the one you see me wearing in my interview with her (“Interview with the Vampirologist,” Aug. 17, 2014).

I would’ve used that font, but it made Vamped seem too much like an Iron Maiden fansite. Nonetheless, I decided to stick with the metal theme. So why this new one? To make things look a little more pro. Has it cost our site a little of its personality? That’s depends on how much personality you invest in a fuzzy font with Photoshopped shadow effects.

Vamped’s navigation menu has always been a challenge: how do you narrow down exactly what you want to direct readers to  on one tiny strip? I followed a loose “personal page” format and lumped all of our article categories under the generic “Archive,” leaving space for other more “social” elements, which have been present in Vamped’s design from its BuddyBoss days (“Major Overhaul,” Sept. 2, 2014).

But this time, I’ve decided to showcase our site’s article categories—which meant the other items on the navigation menu (“About,” “Write,” “News,” “Forum,” “Events,” “Win,” “Store” and “Contact”) have either been shuffled elsewhere on the site or discontinued. And in order to focus on our article categories, I’ve had to revise those, too: for instance, “Tropes” will no longer be a category, but a “topic.” I’d also filed my vampire killing kits articles under “Paraphernalia” (which wasn’t even incorporated in the dropdown list). You’ll now find those under “Entertainment,” “Antiques & Fine Art.”

Oh, and what you’re seeing behind that dropdown menu up there is an article carousel—that’s been scrapped, too.

I originally followed the MH Theme Magazine template fairly closely; the footer widgets, above, are virtually identical to the theme’s default setting. In all honesty though, they were mainly just filler; I needed to put something there. I mean, what’s “News in Pictures”? Just a randomly-generated set of thumbnails linking to random articles. Didn’t serve much purpose.

You’ll also notice they weren’t very symmetrical. I’ve amended that with this new design by having equal items in each of the three footer columns. Yes, we’ve shrunk from four to three: we now have “Info” (to cover general information about our site), “Follow Us” (links to our social media) and “Affiliates” (websites which feature our site on their homepage).

#3. All Latest Posts Displayed on Homepage; No More Separate Sidebars

The previous design featured a static homepage, which is why it had a different layout compared to what you saw in article view. It’s also why I had an “Archive” page, so you could flip through Vamped’s list of articles, one page at a time—a static homepage doesn’t seem to allow that luxury.

You can see another problem here, too: symmetrics. The post category displays would vary on the page, depending on how long the article titles were (in fact, that’s why I started writing longer article titles in the first place). I much prefer design consistency—and quite frankly, it looked shitty, so it had to go.

The sidebar on the homepage, if I could call it that, had “Search” (a keyword search function), “Popular” (a display of our five most popular [most commented on] posts,” and “Blog” (a display of five of our latest blog posts).

But the article sidebars differed significantly and were, in order: “Search (a keyword search function),” Stay Connected” (social media icons connecting to our social media sites), “Connect with Us on Facebook” (a Facebook like box), “Latest” (our five latest articles), “Random” (five randomly generated articles), “Join the Conversation” (10 of the latest comments on articles) and “Authors” (a listing of profiles for authors who have written articles for the site).

Vamped has been ad-free since its inception—until now. While alluding to our site’s upcoming overhaul (“Going Pro: Vamped Heads in New Direction with Upcoming Events,” March 20, 2015), Erin mentioned: “One of the new site features will be paid advertising spaces. We’re currently solidifying some future clients and really excited about this new opportunity. We’ll also be setting up an exclusive affiliate program.”

That program hasn’t been set up yet, but we do have three ads on the page. The first, right at the top of the page, is a banner ad for Vampire Gourmet Coffee, which links to its producer, Vampire Vinyard’s homepage.

In the sidebar, you’ll see an ad for “There Are Such Things! Vampire Studies Symposium 2015,” which is being held at North Central Texas College’s Corinth campus on Oct. 31, 2015—clicking on it will take you to the event’s registration page.

Those ads are placeholders; tokens of appreciation for friends of Vamped: we have a deal with Michael Machat, the owner of Vampire Vinyards, where we get a cut of products brought from his store through readers clicking on that banner. The vampire symposium was organised by my friend, Dax “The Vampire Historian” Stokes, and Vamped has been helping with that too (which is why you’ll see our logo on the event’s page):

Amelia “Amy” Mah is a friend who Erin and I co-admin many Facebook groups with. I mention all this in the interest of disclosure.

In the long run, our site will incorporate more ads. If you’re interested in hosting one on our site, contact us for details. Don’t think we’re “selling out” from doing this, by the way: after all, we still published Andy Boylan’s review of Lisa Dominique Machat’s debut novel, A Walk in the Sun (2013) (“Like Vampire Wine: Lisa Dominique Machat’s Foray into Fiction,” June 1, 2015), which Andy rated a not-too-impressed 5 out of 10—Lisa is Michael Machat’s wife.

We might be happy to take a little cash, but we won’t compromise our integrity: if you’re worried we might not have the best things to say about something you want us to advertise or promote, then Vamped might not be the place for you. 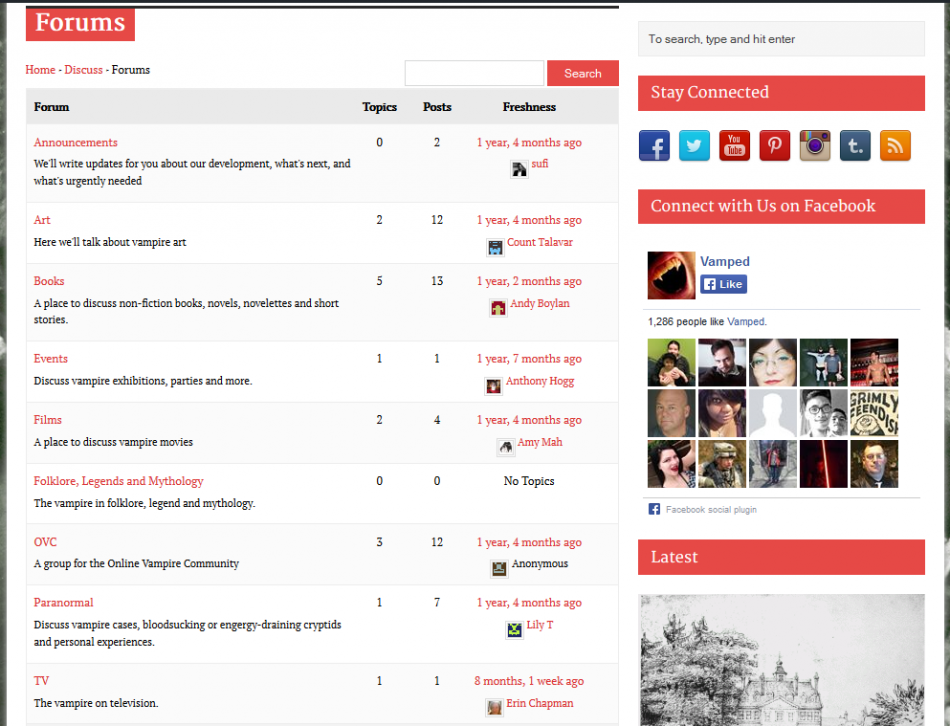 Last year, I wrote: “We’re finding that the site’s forum, carried over from the previous design, isn’t entirely compatible with the site’s current format, so we’ll be phasing it over time” adding: “Not like it makes much difference: it’s barely used now” (“Commenting, Memberships, Forum,” Sept. 14, 2014).

And that’s true, but paradoxically, it was one of our most popular sections: last year, the forum’s “Folklore, Legends and Mythology” group, alone, was viewed 9,848 times. The forum’s lack of activity was enough for me to put the kibbosh on it, though.

That said, it hasn’t disappeared completely. I couldn’t completely obliterate a resource that helped spawn two articles for the site; my “Vampire Picture Mystery—Solved!” (Jan. 28, 2014) and Andy Boylan’s “Stoker and the Bat” (April 5, 2014), respectively. So the forum will live on—as a “book” you can download. Once I’ve finished compiling it.

We’ve saved samples of Vamped’s former appearance on archive.is. If you want to see what our homepage used to look like, click here. For our “Archive” section, which displayed our latest posts, click here. To view an article view example, click here. Lastly, here’s what an author page looked like and here’s our former sitemap layout.