Sean Manchester, 70, a self-proclaimed vampire hunter, sockpuppeteer and serial plagiarist, tackled horror writer heavyweight, Ramsey Campbell, 69, in the comment thread of a blog post interview where I called Manchester out for being a “fraud” and a “wolf in sheep’s clothing” (Maritz 2015).

Going out of his way to prove my assertions, Manchester commented on the thread with his sockpuppet account “B .O.S.,” an online identity he’s used to stalk, harass and malign me with over the last three years in tandem with a blog called Hoggwatch (Hogg 2014).

Writing in third person, Manchester criticised me for being “less than half [his] age, lives on the other side of the world, has never visited Europe, much less England or indeed Highgate, and has therefore not met Seán Manchester.” 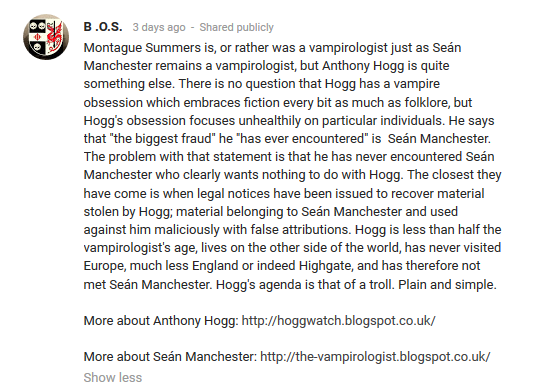 Manchester’s reference to “stolen material” concerned photographs from Manchester’s book, The Highgate Vampire: The Infernal World of the Undead Unearthed at London’s Famous Highgate Cemetery and Environs (1985), published in Erin Chapman’s article for Vamped, “Seeking Vampires in London” (Nov. 16, 2014), which he slapped with a DMCA notice despite being posted in context with fair use laws—there were no false attributions.

Manchester bombarded the comment section with similar diatribes and I parried his smears with evidence backing my rebuttals—but his efforts were ultimately curtailed by a guest appearance from the author of The Doll Who Ate His Mother (1976), among others, Ramsey Campbell:

Well, I have met Seán Manchester, so perhaps my comments bear some weight. His preoccupation with the theft of supposedly copyrighted material appears to date from his own uncredited use in the first edition of THE HIGHGATE VAMPIRE of a still of a Dick Smith make-up for a Dorian Gray film.

Campbell’s allusion to an “uncredited . . . still of a Dick Smith make-up for a Dorian Gray film” refers to a photograph Manchester published in his book, The Highgate Vampire, captioned: “A representation of the vampire in its final moments of dissolution” (1985, 142), sans credit.

Unable to fight back against Campbell’s pointed reference to Manchester’s hypocritical copyright theft, the phony vampire hunter fought back with a flurry of insults, desperately trying to pound Campbell into submission with the ad hominem manoeuvre (“responding to arguments by attacking a person’s character, rather than to the content of their arguments”) and association fallacy (“which asserts that qualities of one thing are inherently qualities of another, merely by an irrelevant association”):

Ramsey Campbell is a writer of pulp fiction and has sat enviously in studio audiences when Seán Manchester has been a featured guest on live television. They first met many years ago on a daytime TV programme. Campbell, according to Seán Manchester, was withdrawn, unfriendly and unsociable, sweating profusely “like a pig on a spit roast.” No conversation took place between them as Campbell focused on setting up a display of his paperback horror stories.

It should also be pointed out that Ramsey Campbell is a friend of the Australian troll Anthony Hogg and also an active member of one of Hogg’s more malicious groups aimed at misrepresenting, maligning and defaming Seán Manchester.

He is also a Facebook friend of Felix Garnet who collaborates with David Farrant in projects of the most dubious kind imaginable. Garnet is a personal friend of David Farrant, Farrant’s so-called “secretary” Patsy Langley and the sock-puppet specialist and Farrant lackey Redmond McWilliams who recently confessed to impersonating Seán Manchester and some of his associates on Facebook.

Ramsey Campbell has apparently also been mistaken for Ian Smith, the rotund actor who plays the character “Harold Bishop” in the Australian soap “Neighbours.” If only the humourless Campbell was half as nice as Harold!

Manchester’s “writer of pulp fiction” jibe was a risky move against Campbell who’s won the Bram Stoker Award, British Fantasy Award and World Fantasy Award for fiction, while Manchester’s written one novel: Carmel: A Vampire Tale (2000), which he billed a “definitive sequel” to Bram Stoker’s Dracula (1897), but has been described as “a poor work, a mumbo jumbo of diverse ingredients mixed together in a clumsy manner” (Bourgault 2012).

The “daytime TV programme” Manchester referred to was an episode of Central Weekend, ca. 1990, where Manchester was roundly mocked by the host and audience members—including Campbell and pop culture critic, Kim Newman—for discussing his unsubstantiated vampire hunting claims and taking his persona too seriously:

But Campbell didn’t take that swing, instead honing in on Manchester’s recollection of events, refusal to address the copyright hypocrisy and dealing a solid blow to Manchester’s “pulp fiction” jab:

I’m very much afraid that almost all of that is a lie. I brought no books with me and displayed none, and Manchester and I did indeed strike up an amicable conversation. It’s interesting that Mr B. O. S. chooses not to refer to the Dick Smith business.

I’ve never found a reason to envy Manchester. As for “pulp fiction” – well, if that places me alongside the likes of [H. P.] Lovecraft and [Ray] Bradbury and [Fritz] Leiber (who wrote for the same magazine that Mr B. O. S. presumably has in mind), I’m happy to be there.

With the “pulp fiction” jab lain waste, Manchester tried landing a few right crosses on Campbell’s memory—while expressing uncertainty over the name of the very thing he was criticising Campbell for not knowing. He then invited Campbell, in third person, to contact him:

Ramsey Campbell obviously has a poor memory. Seán Manchester could identify precisely the programme hosted by a young Eamonn Holmes that ran through an entire morning. The book display is quite apparent in the video, but we don’t have the programme’s name. Contact Seán Manchester and he will provide it straight away.

There is nothing much really to say about the Dick Smith image used in the 1985 British Occult Society publication on page 142. The caption makes very clear that it is intended as a “representation” and nothing else. Permission was given for the use of the image at the time, as will be confirmed by the copyright holder. Consider the topic that so concerns Ramsey Campbell, though heaven only knows why, now referred to. Obsessively raising it (and Ramsey Campbell hasn’t stopped raising it for 30 years!) will only explain why Campbell and Hogg are such obvious bedfellows.

It is nevertheless interesting that Campbell avoids all reference for the real reason he resents Seán Manchester. It goes back to reviews he did of two of Seán Manchester’s books in something called “Shock Express [sic]” (1991) where Campbell makes the most appalling claims. The publisher (Titan Books) conceded that Campbell “does agree that he made errors” and two years later, under pressure, Ramsey Campbell wrote in a letter to Seán Manchester: “I apologise for any distress this has caused you and your wife. … It is a mystery to me what could have influenced my pen to make such a grotesque and obvious error. Yours sincerely, Ramsey Campbell.” (Source: “The Vampire Hunter’s Handbook: A Concise Vampirological Guide” by Seán Manchester).

Another risky move; countering a theft “Campbell hasn’t stopped raising it for 30 years” with references to a 24-year-old article: “From Christ to Satan,” Campbell’s review of Manchester’s books, The Highgate Vampire (1985; 1991) and From Satan to Christ (1988). The review was originally published in Shock Xpress: The Essential Guide to Exploitation Cinema, Vol. 1 (London: Titan Books, 1991). The claim? (Manchester 1997, 94):

Ramsey Campbell makes the appalling claim that my wife has given birth to the Antichrist. Though the publisher conceded that Ramsey Campbell “does agree that he made an error in appearing to attribute the birth of the Antichrist to your wife,” no correction or apology ever appeared in print on public record. After two years of pressure from his publisher (Titan Books), Campbell privately conceded in a letter to myself:

“Dear Bishop … I apologise for any distress this has caused you and your wife. … It remains a mystery to me what could have influenced me to pen such a grotesque and obvious error. Yours sincerely, Ramsey Campbell.”

Campbell countered in a Facebook comment posted on June 13, 2015: “That’s broadly accurate. Titan could have made it public but didn’t – not my problem.” Manchester also omitted mentioning Campbell’s review was revised and retitled “The Strange Case of Sean Manchester” and published in Ramsey Campbell, Probably: On Horror and Sundry Fantasies (2002), edited by S.T. Joshi, “but with the Antichrist mistake removed and with some additional material,” Campbell revealed.

Campbell was also gracious enough to concede to one of Manchester’s points of contention, but held his position and stuck to the facts:

+B .O.S. Well, if I’m wrong about the book display, fair enough. It would have been at the invitation of the researchers who originally asked me to participate. My other memories aren’t wrong, though.

Sorry, I don’t resent Manchester at all, but simply find him amusing. If the Dick Smith image was used with permission, why was there no copyright acknowledgement in the book itself? The same applies to the Hammer Film still used in the book. The copyright page simply copyrights the book to Manchester.

The “Hammer Film still” was from The Devil Rides Out (1968), directed by Terence Fisher, which Manchester captioned: “This scene from The Devil Rides Out depicts the use of a Magic Circle to withstand attack by a Satanic force, much like the protective barrier cast by the author and many others throughout history” (1985, 140). The scene is also famous for another reason: its eerie similarity to the “giant spider” scene in Manchester’s book (Hogg 2009).

Manchester parlayed Campbell’s copyright remarks with another ad hominem round, punctuated by smack talk. But by now, Manchester was clearly running out of steam:

Why is Ramsey Campbell so peculiarly concerned about one man and what is in his books? These are signs of something unhealthy and obsessive. It has been going on at least a quarter of a century and really makes no sense at all. It is as if Campbell feels threatened by the very existence of Seán Manchester and his published works.

As stated previously, it is interesting that Ramsey Campbell avoids all reference to the actual reason he really resents Seán Manchester.

That’s when Campbell saw his opening and landed the coup de grâce on his malignant opponent:

+B .O.S. Threatened? Quite the opposite. In fact, let me show that I bear no grudge even if I ever had a reason for one. Mr BOS, would you mind passing on an invitation to the gentleman, since I gather that you have his ear? If he is free on 13 July and can be at the Anglican Cathedral in Liverpool, I’m happy to invite him to be present when Liverpool John Moores University gives me an Honorary Fellowship. The University says it is for outstanding services to literature.

After that blow, Manchester left no further comment on the thread. Which just goes to show that nothing hits harder than cold, hard fact—and pretenders should pick their battles more carefully (Marketing and Corporate Communications 2015):

Ramsey Campbell receives his Honorary Fellowship for his outstanding contribution to literature. Born in Liverpool, he attended St Edwards’ College, and has lived all of his life on Merseyside. He is a writer, editor and critic who has been a creative force for over 50 years. He is perhaps the world’s most decorated author of horror, winning four World Fantasy Awards, ten British Fantasy Awards, three Bram Stoker Awards, and the Horror Writers’ Association’s Lifetime Achievement Award. Ramsey has a longstanding relationship with BBC Radio Merseyside, where he regularly broadcasts, having reviewed films for the station for almost forty years. In recent years the Liverpool Echo included him as a member of ‘The Scouserati’ – the 366 most influential Scousers on the planet.